Dublin’s dominance of State ‘near unique’ in western world 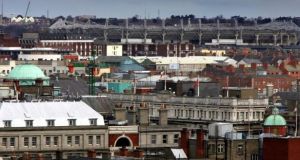 Dublin’s influence is so “dominant” that it may be unique in the western world, a senior Government planner has said.

Addressing a conference at NUI Galway on growing regional disparities, Department of Housing and Planning’s senior planning adviser Paul Hogan said that the capital has 40 per cent of the State’s population, and its output represents half of gross domestic product.

“Dublin is the same in size and population terms as the next 40 towns and cities combined in Ireland,” Mr Hogan said, with a footprint extending from Cavan to Wexford.

“Outside of city states like Singapore I think this is possibly unique,” said Mr Hogan.

He said he had analysed comparable small countries such as Denmark, New Zealand, Finland, Scotland and “in every single case they have twice as many cities as we do at the levels below Dublin”.

“If we don’t get it right, we will see the consequences for the next 25 years,” he said.

Population growth over the past decade alone has produced the equivalent of a Galway city every year, and trends suggest that this will accelerate over the next 30 years to 6.5 million.

A “two-strand approach” to development will have to be pursued to ensure rural areas are not left behind, he said.

Dr Ó Riordáin singled out the report by the Commission for Economic Development of Rural Areas (Cedra), published in April 2014, as a “brilliant piece of work”, but said it needs to be implemented.

This year’s preliminary Census figures show a population drop in three western counties – Donegal, Mayo and Sligo – when overall numbers on the island are increasing.

Economic and Social Research Institute (ESRI) associate research professor Dr Edgar Morgenroth said that the State needed to think about “where the regions are heading”, given the growing divergence.

He noted that the price range of houses nationally is now as high as it was in the boom years.

“In the boom that gave rise to the sprawl, and we’re now going exactly back to where we were before, with very high house prices in Dublin and much lower house prices elsewhere,” he said.

The west is one of the weaker regions that has “done the best”, while the midlands had been one of the most poorly performing regions for “some time”, he said.

The southeast has “lost the most ground” and had been in recession since 2003, he said. The midwest is “troubling”, and both Waterford and Limerick are the two cities that had “consistently underperformed” in relation to their size.

The two cities had “not managed to shake off the impact” of job losses through the closure of Waterford Crystal and Dell in Limerick, Dr Morgenroth said. By contrast, Galway had successfully shaken off the impact of Digital’s closure in 1993, with many former staffers behind the city’s reinvention as a successful medical device cluster, he noted.

Dr Morgenroth said that research on the full trajectory in the regions had been hampered by a decision by former minister for environment John Gormley to stop publishing his department’s annual construction industry review and outlook.

The conference was hosted by the Regional Studies Association Irish branch with NUIG and the Western Development Commission.