Don’t be fooled by the spring snows, they are further proof of global warming 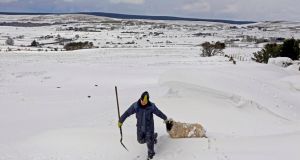 What a difference a year makes; a year ago Europe was basking in some of the warmest spring temperatures recorded. Last week all that seemed a very distant memory as we shivered through a prolonged freeze, with snow encroaching into what was once the height of spring.

The reason for this worrying; Arctic ice melted at record rates last year, releasing heat energy. This altered the fast-flowing air currents above our planet, known as the Jet stream, allowing cold Arctic air to travel much further south than usual.

While it may seem paradoxical that Arctic warming can freeze us so much, it is exactly what climate scientists have long predicted. And it will get worse. Prof Jennifer Francis of the Institute of Marine and Coastal Sciences at Rutgers University in the US notes soberingly that “sea ice is... 80 per cent less than it was just 30 years ago... This is a symptom of global warming.”

The scientific consensus is unequivocal: climate change is happening right now, at a rate unprecedented in Earth’s history.

Earth’s climate is sensitive to change, and temperature swings are only the tip of the rapidly-melting iceberg. Despite the gravity of this threat, reaction has been somewhat muted, hovering somewhere between apathy and denial.

Understandably, climate science can be confusing, perhaps explaining some of our inertia; “global warming” refers to the increase in average global temperature. Counter-intuitively, this can lead to regions of cooling. The mechanism behind this is the greenhouse effect, which arises because certain gases have the ability to absorb thermal radiation from the Earth’s surface.

These gases then re-radiate it in all directions, including back towards Earth and essentially act as a heat trap, warming up the planet. This is long since understood — it was hypothesised by Joseph Fourier in 1824 and experimentally verified by Irish physicist John Tyndall in 1859. The fact that humans can thus affect climate is no surprise, what is surprising is just how fast we’re doing it.

Some question whether this effect is anthropogenic; perhaps this is all just a natural cycle? Sadly, no — ancient ice cores yield a record of temperature and atmosphere over hundreds of millennia, and shows our current rate of warming is hundreds of times beyond anything that has gone before, coinciding with the dawn of industrialisation.

More alarming is that while at no point during any previous glacial or interglacial period has the carbon dioxide (CO2) concentration level reached as high as 300 ppm (parts per million), current levels are 390 ppm and rising, with predictions of up to 600 ppm in coming decades. This is most distinctly not natural variation.

Nor can we evade responsibly by postulating that this level is unrelated to human activities — CO2 released from fossil fuels has a distinct chemical signature, and points to our guilt as readily as fingerprints at a crime scene. This leaves only the inescapable conclusion that we are driving the destruction of our own environment.

The discussion is no longer about avoidance, but limitation. The most optimistic prediction is that in order to have a chance of limiting temperature rises to “only” 2 degree Celsius, we would need a global “carbon budget” of less than 886 gigatons between 2000 and 2050. By only 2006, we had already produced 234 gigatons. Coal is without a doubt the worst offender, both in terms of CO2 output and health, killing 1.3 million annually. Yet despite this, 2011 saw an ominous 5 per cent global rise in consumption of coal.

Since 1992, global CO2 emissions have risen 48 per cent, with power generation making up the bulk of this. To mitigate this, low carbon energy is imperative. Renewables are part of the solution, but they simply do not have the required yield or reliability. Nuclear energy does, but still provokes an emotional rather than a rational reaction, and is all too frequently ignored for the sake of political expediency. Two years on, it bears repeating that the Fukushima accident of 2011 has killed nobody and likely never will. The causitive tsunami*, by contrast, killed more than 18,000. If nothing substantial is done, such disasters will increase in both frequency and intensity

It is also vital we reduce our personal energy expenditure. Home insulatation and reducing car usage can substantially reduce one’s carbon foot print. Perhaps the most powerful thing we can do collectively is insist our elected leaders take action, imposing carbon levies, rewarding energy efficiency, and most crucially, moving away from fossil fuels towards renewable and nuclear energy.

Climate change is not someone else’s problem — it affects all of us. To have any hope of limiting the damage we have already wrought, action must be taken now. The writing has been on the wall for some time. Whether we heed it remains to be seen.