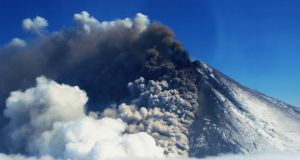 Researchers have successfully linked the climatic aftermath of volcanic eruptions to extreme cold weather events here over a 1,200-year period

Could the writings of ancient Irish monks and scribes hold a key to our cold weather patterns? A group of Irish and international researchers think so.

Studying descriptions of weather in the medieval Irish writings and comparing them with measurements taken from ice cores, researchers have successfully linked the climatic aftermath of volcanic eruptions to extreme cold weather events here over a 1,200-year period.

Researchers from universities including Harvard, UCC, UCD, Trinity College and Queens University Belfast assessed over 40,000 Irish and Latin entries in the Irish annals. Kept by educated scribes in monastic centres until the 13th century and by historians until 1649, the annals describe major events in Ireland’s history.

Over the 1,200 years the study identified 48 volcanic eruptions from a separate study, the Greenland Ice Sheet Project. Of these events, 38 were associated closely in time with 37 extreme weather events described in the annals. They include heavy snowfall, frost, and prolonged ice covering lakes and rivers.

The study is published in the the Institute of Physics Publishing’s journal Environmental Research Letters.