DIY floodproofing: the couple who built their own defences

Willem van Goor and Doutsje Nauta, who live on the eastern shore of Achill Island, took action after their home was flooded twice: first by rainwater and then by the sea 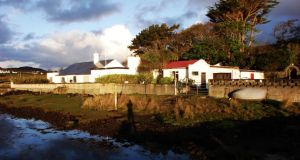 When Willem van Goor and Doutsje Nauta, a Dutch couple, bought Bleanaskill Lodge, on the eastern shore of Achill Island, in the late 1990s the locals told them the house had not been flooded in living memory.

The couple put all the money from their flood insurance into building their own defences. They built up the wall on the sea side of property, to prevent waves crashing into the garden. They raised the gullies and shortened the downpipes from the roof of the house, so that rainwater is able to flow into the sea without seawater entering the gullies at high tide. They installed pumps to automatically push rainwater into the sea. They also installed dykes and a breakwater to prevent further flooding from the sea.

Their insurance company refused to cover flood damage in the future, as has been the experience of many homeowners living near the coast.

Then came the Atlantic storms of this year. “This time the problem was different. The water seeped into the house from under the floors. We have realised that the sea walls that we built on were originally built in the early 1900s without a foundation, so we will need to build another sea wall. We will also either have to tile partially up the walls, or fill in the floors with new concrete right up to the walls, and retile,” says Van Goor.

“We can’t pay for this work, and our house is the lowest-lying house in the area, so we hope that we will get money from a European fund to make a new barrier wall.”

He says that the building of flood defences has be taken more seriously. “In Holland almost half of the national income is spent on preventing flooding to the homes of eight million people who live below sea level.

“Artificial flood plains have been created in areas of low population density, so people can be moved out of there if sea levels need to be let into these areas in an emergency.”