Divide between developed and developing nations

Tension between the two central to debate at Paris climate conference 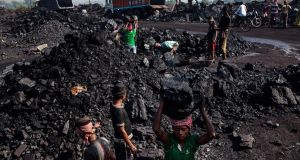 Day labourers load coal into trucks at an open pit coal mine in the Bestacolla Colliery in Jharia, India. Photographer: Sanjit Das/Getty Images

What distinguishes the Paris climate summit from other such gatherings over the past 20 years is that it’s the first time virtually all of the world’s nations have committed to being part of the solution, with 180 pledging to take action aimed at tackling global warming.

These 180 countries account for about 90 per cent of global greenhouse gas emissions. By contrast, the 1997 Kyoto protocol on climate change applied to just 37 developed countries, which accounted for substantially less than half of the world’s emissions at that time.

The problem is that the current pledges – known as Intended Nationally Determined Contributions, or INDCs in United Nations’ jargon – are not legally binding, nor can they be, because of the difficulties of ratifying anything that could be called a “treaty”, especially in the United States.

The US delegation has circulated a “non-paper” to a number of other countries suggesting that further pledges under the Paris accord should also be determined independently by each country, rather than being mandatory or subject to sanction if they fail to deliver.

“What is expected from countries should be differentiated to capture their varying circumstances and capabilities today and in the future, not based on outdated categories created in 1992” under the UN Framework Convention on Climate Change, Stern said.

This is anathema to China, India and other much poorer developing countries. They insist that the historical responsibility of countries that achieved economic growth and prosperity over the past 200 years by burning fossil fuels must continue to be recognised.

In its “non-paper”, the US also wants the long-term goal of the Paris agreement to be defined as “collectively aiming to achieve climate neutrality over the course of this century”, which would allow countries to continue burning fossil fuels by buying carbon credits elsewhere.

As world leaders gathered in Paris for the high-level opening session yesterday, negotiators were grappling with a 54-page draft text peppered with square brackets indicating that agreement had yet to be reached on key points, such as the level of ambition needed.

But China’s chief negotiator, Su Wei, said the “mere presence” in Paris of 150 heads of state or government – an unprecedented number for any event in the UN’s history – “will give important political momentum in moulding the negotiation process” over the next 10 days.

Ken Kimmell, president of the Washington-based Union of Concerned Scientists, said the emissions cuts countries had proposed, “while an important step forward, will not collectively achieve the goal of holding global temperature increases to two degrees Celsius”.

“So, to be a success, the agreement must require countries to revisit their pledges in the years to come, raising the level of ambition to take into account advances in technology and economies of scale that make cutting emissions easier or less expensive,” he said.

According to Kimmell, an environmental lawyer, a “good outcome” in Paris would be a commitment to revise pledges at least every five years after the accord takes effect in 2020.

“Given the so-called ambition gap, we can’t afford to wait until 2030 to revisit this.”

He said another important element to watch for in the negotiations is a long-term goal to spur future actions in raising the level of ambition. It needed to send an “unmistakable signal that the age of fossil fuels is coming to a close”, pointing the world towards renewable energy.

Although the accord will not be legally binding, Kimmell said it needed to have a mechanism for “naming and shaming” countries that don’t fulfil their pledges. Therefore, it must include “a reliable and common protocol for each country to monitor, report and verify progress”.

Also critical for Paris is how the negotiations “handle the issue of fairness for poorer countries that have contributed little to climate change, are particularly vulnerable to its effects and have the fewest resources to cut their own emissions and prepare for what is coming”.

At the abortive Copenhagen climate summit in 2009, developed countries promised to mobilise $100 billion (€95 billion) a year in public and private financing by 2020 to assist developing countries. So far, however, only $6 billion (€5.7 billion) has been pledged to the Green Climate Fund.

That’s why a number of developing countries, notably including India, have made “conditional pledges”– commitments to cut emissions that are conditional on the availability of funds and technology from richer countries to help them grow in a low-carbon, sustainable way.

Ravi Prasad, head of India’s delegation in Paris, said he hoped to “get a just, equitable, durable an ambitious climate deal” by the time COP21 closes on December 11th. But he stressed that it must be grounded on the principles of the UN framework convention adopted in 1992.

Gurdial S Nijar, spokesman for the Like-Minded Developing Countries group – which includes China and India – said it was clear and “very disturbing” that attempts were being made by others to “dismantle a fundamental precept” of the climate change convention.

This precept relates to the “common but differentiated responsibilities” of parties to the convention, meaning those that got rich during the fossil fuel era “owe a debt” to developing countries which had yet to eradicate poverty and provide food security for all of their people.