Dispute over route of new walk and cycleway along Dublin Bay 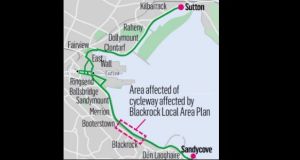 Dún Laoghaire-Rathdown County Council has been accused of trying to scupper the Sutton to Sandycove (S2S) cycle and walkway project by proposing to reroute a prominent section of the scheme inland and away from the seafront.

Construction of the proposed 22km cycle path and promenade along Dublin Bay on the south side has been held up because of concerns about its impact on several bird habitats.

In its latest local area plan for Blackrock, the council proposes to resolve the impasse by rerouting a stretch of the scheme away from the coast and through Blackrock Park, instead of building an eight metre-wide path along the water’s edge as originally planned.

Negative impact
It cites the “likely negative impact on the local bird habitats” as the reason for the proposed rerouting. However, the S2S advocacy group said the proposal was tantamount to abandoning the original scheme as it would bring cyclists and walkers away from the seafront and inevitably back onto a busy traffic route.

Michael Collins of the S2S advocacy group said the council’s plan “entirely defeated the purpose” of the scheme, which is to open up the seafront as a public and tourist amenity, and not just to build a cycleway.

Abandon
“The council clearly intends to abandon the Sutton to Sandycove walkway and cycleway project on the seafront and reroute it inside the Dart line and inevitably on to the existing roads at both ends of Blackrock Park,” Mr Collins said.

“If implemented, there will be no seafront walkway or cycleway between Sandymount and Dún Laoghaire. ”

The council said it had not abandoned the project but was following advice from the Department of the Environment to seek alternative routes to stretches of the original plan, which impacted on bird roosts or bird feeding areas. The council said, however, it would engage an environmental consultant to review its file on the project.

1 Coronavirus: No further deaths and 57 confirmed cases reported in State
2 O’Doherty ‘trying to evade’ service of defamation proceedings, court hears
3 Three children test positive for Covid-19 at creche in Co Meath
4 ‘We can be fined how much?’ Shoppers mask up in Dublin city centre
5 Coronavirus: Non-essential travel from US set to be banned within days
Real news has value SUBSCRIBE