CCTV to be used to prosecute illegal dumpers 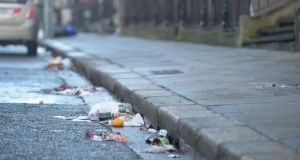 Dubliners who throw their rubbish in the street are the target of a new “zero tolerance” crackdown on illegal dumping by Dublin City Council.

From this week the council is installing CCTV cameras and undertaking inspections of homes in the north inner city, recently identified as the second dirtiest place in the State by Irish Businesses Against Litter (Ibal).

The council last December announced a “blitz” on dumping black-spots in the city, where residents leave their rubbish in the streets instead of paying for waste collection.

However, three Dublin districts were last month among the four dirtiest places in the State, according to the anti-litter league assessment of 40 urban areas carried out by An Taisce for Ibal. Dublin’s north inner city was pipped only by Farranree in Cork for the title of Ireland’s worst litter black spot.

“For the north inner city to be declared to be 39th out of 40 towns and cities in the country as a litter black spot is clearly not acceptable,” senior executive officer of the council’s waste management division Brian Hanney said.

“Waste management devotes a considerable amount of resources to cleaning this area and it is not acceptable for people or households to dump their rubbish on the street,” he said.

A litter action group had been set up last January to deal with the problem in the north inner city and while there had been “some improvement” the situation was “still far from satisfactory” Mr Hanney said.

The council has decided to change tack and concentrate on specific, small areas at a time within the north inner city for improvement. Starting this week it will focus on the Rutland Place, Summerhill and Summerhill Parade area.

Signs have been erected in the area indicating the correct bin collection day. Letters are being sent to all property owners and occupiers advising them of their legal obligations in relation to waste and informing them of the council’s “zero tolerance approach” to enforcement. The letters will be followed by a visit by litter wardens to every property.

CCTV will be installed at the dumping blackspots and will be used to build court cases against offenders.

The council is also taking legal advice on the possibility of taking still images from the footage and posting them in the area. All dumped bags will also be searched by litter wardens with a view to initiating prosecutions.

Where there is appropriate storage space the council will insist that occupiers switch from using bags to wheelie bins.