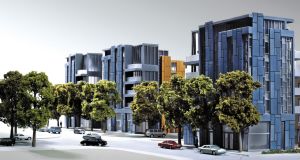 Dublin city councillors have committed themselves to increasing the level of social housing in the refurbished Priory Hall complex in Donaghmede.

Councillors last night backed a motion to increase the level of social housing in the development from 20 per cent to 30 per cent despite city manager Owen Keegan saying that such a move could leave the council open to litigation and delay the entire project.

The 187-home complex was evacuated on the orders of the High Court in October 2011 after significant defects in its fire-safety measures were uncovered. Following a 2013 agreement between the then government, owners and the city council, a €27million refurbishment was undertaken of the complex by the council.

Work on 60 apartments in the development finished recently and councillors were told the properties were to be marketed for sale from the end of next month under the estate’s changed name, New Priory.

However, the motion was raised at the council’s monthly meeting last night by Cllr Allison Gilliland (Labour), saying that the level of social housing should be increased to 30 per cent, which was approved by a majority of councillors.

This was against the advice of Mr Keegan, who said the council was legally bound to sell a specific number of apartments to private purchasers. He offered to ask the parties to the agreement to approve a change in the level of social housing, “possibly with the aid of a housing body”.

But he said to change the deal “entered into in good faith” would expose the council “to risk of litigation” and could delay the whole project.

Chairman of the council’s housing committee Daithí Doolan said he was prepared to support the increase to 30 per cent social housing “on the basis that it is a minimum of 30 per cent”. He said the councillors’ decision would strengthen the city manager’s position when dealing with the parties to the 2013 agreement.

He was responding after councillors complained that finance for a number of “sustainable transport” projects had been withdrawn by the National Transport Authority (NTA).

A number of councillors also argued that although they were associated with the greenway projects, the first they heard of them being stalled was in a newspaper.

Mr Keegan, a member of the board of the NTA, told councillors that in previous years the authority had deflected savings in other areas towards greenways and walking trails.

However, he said there was “shock and surprise” in the authority when the current financial allocation was announced.

“I am fairly confident it will be resolved,” he said.

Labour’s Dermot Lacey said the problem, at least in relation to the Dodder greenway, was that the authority had “overengineered” the cycleway,