Could Stena’s departure give Dún Laoghaire an edge in the cruise trade? 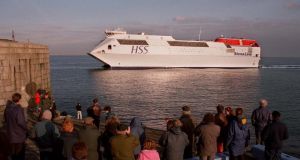 Alistair Rumball is good at making a splash or two, as marine co-ordinator for films such as The Guard and Saving Private Ryan. The Sky television series of Treasure Island was shot in Rumball’s home port of Dún Laoghaire, where he handled safe navigation of the pirate ship Hispaniola (played by the Swedish-built tall ship Earl of Pembroke) in full sail through Dalkey Sound.

This week, however, Rumball and fellow harbour users were witness to a different type of drama, as Stena Line’s permanent pull-out from Dún Laoghaire was confirmed. The severing of this two-century- old sea link – initially with a mail ship and then with a ferry, from 1835 – was described as a “massive” and “devastating” blow.

“The worst-kept secret on this coastline” is how Rumball describes the announcement. In the 38 years he has been running a dinghy sail-training school in the harbour there were always rumours about the future of the passenger-ferry service.

Piling on the pressure in recent years has been competition from low-cost airlines and from Dublin Port’s passenger and freight services, as well as loss of duty-free business. But the construction of Dublin Port Tunnel was regarded as the final blow.

The loss is as much psychological as economic, with the ferry movements symbolising the sort of activity that residents could set watches and clocks to.

But it also gives a fillip to Dún Laoghaire Harbour Company’s master plan, which aims to move away from what its chief executive, Gerry Dunne, describes as “over-reliance on one large operator” and a freight business that was never in keeping with Dublin’s character or its road network.

Richard Boyd-Barrett, the People Before Profit TD for Dún Laoghaire, said this week that Stena’s withdrawal would be used as “yet another excuse to accelerate the back-door privatisation” of the harbour.

Certainly, public access, or the lack of it, has been at the heart of previous waterfront controversies, such as construction of the privately owned marina in the late 1980s, infill of the harbour to accommodate Stena, and failed plans for a high-rise waterfront and redevelopment of the derelict baths.

Dunne says that his master plan has enough diversity to ensure survival. He also notes that its tone is in keeping with a national port policy, published by Leo Varadkar when he was transport minister, which, he says, represented a “very fundamental shift” away from impractical competition. Responsibility for smaller ports of “regional significance”, including Dún Laoghaire, will be transferred to local authorities.

“Galway and Dún Laoghaire have been deemed as no longer suitable for the heavy-lift business and as more suitable for marine leisure and cruise ships,” Dunne says. “We don’t disagree with that, as we never had the road network to be a Rotterdam.”

Dunne would like to see fulfilment of this policy to ensure that cruise business consolidated in Dún Laoghaire, which would elicit stiff opposition from Dublin Port Company. Its €200 million scheme for new berthage to accommodate cruise liners at East Link Bridge is before An Bord Pleanála.

The planning application for Dún Laoghaire’s proposed €15 million cruise-liner berth, which is one of several elements of its master plan, is due to be submitted very shortly, Dunne says.

But how to finance such a project without the €7 million annual revenue from Stena when service was at its peak? Dunne says the answer is to use Stena’s empty acreage.

The master plan identified the lack of population and workforce in the harbour, he says. Developing 300 or so residential units, along with hotel and select retail elements on St Michael’s Pier, will “give us the financial security to develop further”.

Stena is under contractual obligation to remove its docking link, and Dunne says he has already had three “fairly serious” inquiries about providing a replacement fast-ferry service for passengers and cars.

Stena’s huge terminal was designed to accommodate 500,000 foot passengers, however. The harbour company believes it could house the initial location for the diaspora centre, and this could test the case for a purpose-built centre on Carlisle Pier.

Sam Field Corbett, who has spearheaded efforts to save Naomh Éanna, the former Aran Island ferry, says that any plan for Dún Laoghaire has to ensure that the waterfront is “socially inclusive” and builds on its rich heritage.

Field Corbett points to Enkhuizen, in the Netherlands, shaped like Dún Laoghaire, with the Zuiderzee museum and berths for tall ships and for working craft.

Dún Laoghaire’s new library, the LexIcon, is one mark of the town’s turn to the sea again, and he believes it should embrace its destiny as, in the worlds of the artist Peter Pearson, the Phoenix Park of Dublin Bay.