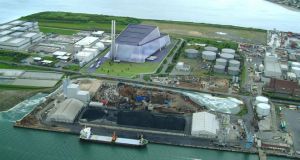 A computer generated image of the proposed Poolbeg incinerator in Dublin.

The controversial Poolbeg waste incinerator in Dublin looks set to go ahead this year after the State’s public private partnership financial watchdog approved the project.

Councillors in Dublin City Council were told yesterday evening that the National Development Finance Agency had issued a value for money certificate yesterday for the 600,000-tonne waste-to-energy plant, which had been subjected to numerous financial and legal delays.

While the project had been awarded value-for-money certificates by the agency twice before, these were out of date.

The agency’s approval was the final hurdle before the council, which has had planning permission for the plant since 2007, could give the go-ahead to Covanta, the US firm contracted to build and run it.

Covanta is to spend €500 million developing the plant ,which will take three years to build.

Almost €100 million has already been spent by the Dublin local authorities on the project, including €32 million for consultants and €52 million for the site on the Poolbeg peninsula, now worth an estimated €6 million.

The project will provide 300 jobs in construction and 100 in operation. It will also provide energy for 80,000 homes per year.

If the project were not to go ahead, local authorities would lose an estimated €105 million, including compensation for Covanta in the region of €20 million.

According to a report by consultants PwC circulated to councillors, once the plant goes ahead, the authorities could optimistically realise a profit of €155 million over 45 years, €70 million after deducting the money already spent. But a “pessimistic scenario” could result in a profit of €30 million, effectively a loss of €55 million.

It is likely construction work on the plant will begin before the end of the year with the plant opening for business late in 2017.

It will chiefly serve the east and midlands region and according to the traffic management plan for the site, an estimated 121 waste deliveries will be made to the site each day. Trucks will access the site via the M50 and port tunnel.

If the revenue earned is above a certain threshold, the authorities will share 54 per cent of the extra. They will also share in revenue made from the sale of energy generated by the waste incineration process for 45 years.

In addition, locals will benefit from a €10 million community gain fund during the three-year construction phase and up to €600,000 a year once the plant is running.

Councillors in Dublin City have been vocal in their opposition to the plant. But while public representatives in all four Dublin local authorities will be consulted by their respective chief executives next week, the final decision to go ahead with the project will be made by the four council chiefs and looks like a foregone conclusion.