Central taxation not enough to pay for water, O’Toole says 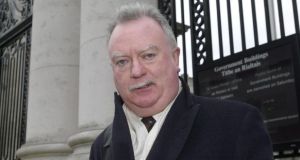 Central taxation is not enough to pay for water services, former senator Joe O’Toole, who will chair the expert commission to examine the future of water charges, has said.

Mr O’Toole, a former president of the Irish Congress of Trade Unions, will head up the new expert commission, which will be tasked with examining the future of domestic water charges in the State.

Mr O’Toole said central taxation was paying for water services at the moment.

“We don’t even know how much per house water is costing, the point I keep making is it’s never been about the charge for water, water is free - you can go to the parish pump, or out with a bucket. It’s the delivery and the treatment of water that costs. That debate hasn’t taken place either,” he said.

When asked if he had paid his water charges, Mr O’Toole said he had. “I’m fully up to date. Of course I have views on water charges. My job is to chair. I’m not biased. I have strong views, they will have to be ameliorated.”

Mr O’ Toole said the commission’s report would be completed within five months.

Mr O’ Toole told Newstalk Breakfast the expert commission has been set up to make recommendations on the funding of water services.

“It is a political exercise, it is a democratic exercise. The reality is we’re trying to resolve a problem which has emerged from the democratic process,” he said.

“People voted a certain way, Leinster House is not prepared to grasp that particular nettle, so we have to find a solution that will have enough sugar on it to make the medicine go down easily.”

Mr O’Toole said Ireland needed to look at how water services work in other countries.

“We need a natural, normal conversation on this issue. That hasn’t happened in Ireland, every time you mention water and charges and costs, people start going all over the place - issues of principle, issues of cost arise.”

Minister for Housing, Planning and Local Government Simon Coveney has said he was determined the suspension of water charges will last for no longer than nine months.