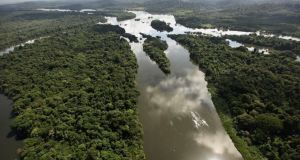 According to the company’s website, Celestial Green specialises in the development of natural capital conservation projects involving the creation of credits associated with reduced deforestation in the Amazon basin. Photograph: Getty Images

The auditors to a Dublin carbon credits company, Celestial Green Ventures plc, have said expenditure by the company for which there was no invoices or receipts created a potential tax liability.

The company, which has an address on Merchants Quay and at one stage was quoted on the First Quotation Board on the Frankfurt Stock Exchange, made a pretax loss of €1 million in 2012, according to accounts just filed.

During the year the company spent €219,267 on travel and entertainment, according to an appendix to the accounts that does not form part of the audited statutory financial statements. This compared with €156,161 for 2011.

Total administrative expenses during the year were €698,970. The accounts do not record any sales. There was a shareholders’ deficit at year’s end of €1.9 million.

According to the company’s website, Celestial Green specialises in the development of natural capital conservation projects involving the creation of credits associated with reduced deforestation in the Amazon basin. Two years ago it announced the suspension of a project involving an agreement with an indigenous Amazonian tribe following legal action taken by the Brazilian authorities.

The company’s auditors, BDO, said they did not provide an audit opinion on the 2012 accounts as they had not been able to obtain sufficient appropriate audit evidence.

As well as the unreceipted expenses, the auditors noted the directors’ reliance on the future sale of carbon credits arising from the 2013 verification as a basis for saying the company was a going concern, and the potential financial implications of two legal cases, as reasons for not giving an audit opinion.

Notes to the accounts said the company was involved in legal proceedings arising from incorrect submissions being made to the Companies Registration Office (CRO), and proceedings regarding the “liquidation of the company’s main customer”.

The former case involved the incorrect currency being used in filings concerning the company’s share capital, while the facts behind the second case are not known.

There was no response by yesterday evening to questions send by email on Tuesday to Celestial Green chief executive Ciaran Kelly.

While directors’ emoluments for 2012 were €22,967, the accounts list a number of related party transactions. During 2012, Mr Kelly was reimbursed for travel and subsistence expenses of €58,259, according to the accounts.

The company incurred expenses during the year on behalf of Carbon Assessment Project Ltd totalling €82,919. However, the accounts said there were significant doubts over the recoverability of €81,486 that remained owed at year’s end. CRO filings show Carbon Assessment is owned by Celestial Green, Mr Kelly and Mike Kelly.

Celestial public relations manager Gary Gannon said he had no comment to make and that Mr Kelly was travelling.