Can we fix our flood defences? Yes we can, but not quickly

Researchers are working to meet EU standards to avoid flooding, rather than having to manage crisis every time 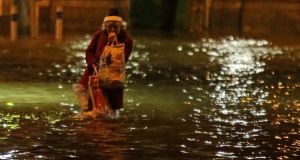 Ireland is shaped a bit like a saucer, shallow in the middle and surrounded by mountains. The Shannon drains the centre and other rivers drain the rest: the Moy and Corrib in the west; the Lee and Blackwater in the southwest; the Barrow, Nore, Suir and Slaney in the southeast; the Liffey, Dodder, Dargle and Boyne in the east; and the Erne, Foyle, Lagan and the two Banns in the north. That’s a lot of water. The major rivers alone run to 6,500km.

Apart from ice, the main sculptors of Ireland’s landscape for millennia have been the wind and the rain. And so it will continue.

At the end of another week of flooding, of people mopping out saturated homes and businesses, of fearing the next storm, and of forecasters saying the greatest risk now is of bloated rivers bursting their banks, the agitated cry might get louder: “Why isn’t the Government doing something?”

The fact is that much is being done, but the nature of the problem means there is no quick solution to Ireland’s flooding.

The best hope may well be the CFRAMprogramme. This project, whose initials stand for Catchment Flood Risk Assessment and Management, is developing a medium- to long-term strategy for the reduction and management of flood risk. It is run by the Office of Public Works under the eye of the EU Commission.

The domestic and EU approach to flood-risk management converged in 2007 with an EU directive requiring member states to carry out preliminary flood-risk assessments by the end of 2011, identifying areas of existing flooding or those at significant risk in the future.

The next step is to prepare flood-hazard and risk maps for the areas identified. Under the directive, this had to be completed by the end of last December. The final task is to prepare, by the end of 2015, flood-risk management plans that set objectives.

“Ireland is in compliance and has been doing what’s required under the directive,” according to the commission.

The programme embraces the EU directive: it is proactive, moving beyond taking action driven by events to preventing such events.

“There are no simple solutions,” says Mark Adamson, who is managing the programme within the OPW. “We hear a lot, on the radio, from people who want action now, and we fully understand that. But we have to go through processes. We have to understand the risk: where is it likely to flood, where does the water come from and what can we do about it?”

That means research, design and evidence-based solutions. Research to date has meant surveying 6,500km of river and taking 50,000 cross-sections. About 10,000sq km of land has been surveyed from the air, measuring topography to within centimetres. As a result about 300 flood hot spots have been identified around the country. Each needs further assessment and some will require a solution, prioritised according to the level of risk.

“We are getting to the end of building computer-generated hydraulic models that allow us to test each of the hot spots, looking at the physical reality of the situation now and putting into that varying volumes of water. This will tell us the effects of flooding in any of these places, should it occur, and hence what needs to be done to prevent it or reduce the risks.”

The model will stress-test eight magnitudes of events: flooding every two years, for example – which is to say a 50 per cent chance of flooding in any year – or flooding only once a century.

The process takes at least two years: from identifying the problem to proposing a solution, then consulting the public, tendering, appointing contractors and, finally, constructing.

But, as Adamson points out, structured relief schemes, costing up to €40 million, are effective. Tidal-flooding prevention measures at Clonmel in Co Tipperary, Mallow in Co Cork and Ringsend in Dublin, following floods in 2002, have improved those areas considerably.

Futureproofing against the effects of climate change is a considerable challenge. “The biggest problem for us is the uncertainty,” says Adamson. “A solution that works well now may not provide the same level of protection in the years to come.”

For that reason the model-builders factor in a rise in sea level of between 50cm and 1m, and an increase in the rate of river flow, to assess what the effects of climate change might mean for flood risk, and how the scheme could cater for this.

After that it’s up to the Government to come up with the money.