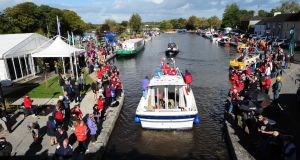 A spokesman for the Inland Waterways Association of Ireland (IWAI).association warnedsaid says that, if the draft proposals are approved by Minister of State for Heritage Jimmy Deenihan, over more than 200 years of boating activity on the canal system “could be killed off with the stroke of a Minister’s pen”.

Revised bylaws and new charges for boat users could result in a “serious decline in boat traffic” on the Grand and Royal canals and Barrow Navigation, according to waterway users.

A spokesman for the Inland Waterways Association of Ireland says if the draft proposals are approved by Minister of State for Heritage Jimmy Deenihan, more than 200 years of boating activity on the canal system “could be killed off with the stroke of a Minister’s pen”.

Under the new regime, he said ,“high charges will be levied on boat traffic, vessel owners will be fined and waterway users will leave”. Instead of benefiting from boating tourism, Dublin and many rural towns and villages “will lose out enormously”.

The proposed amendments to canal bylaws are contained in a draft corporate plan for 2014, drawn up by Enniskillen-based Waterways Ireland, a cross-Border body that controls the canal system, including an underused 60-berth marina in the Grand Canal Docks.

“Some changes will ensure boats must keep moving on the system or face a €150 fine if stationary within a 3km distance above a five- day period,” according to the association. “This is in contradiction to the principles of slow tourism to encourage leisurely use.”

Irish Waterways president Carmel Meegan said the Waterways Ireland proposals “do not appear to put user requirements, tourism development and local communities at the centre of the regulations”. Rather, they were “a threat to local waterways” and boat tourism.

A spokeswoman for Waterways Ireland said it was its intention to “develop the canals as a vibrant recreational waterway for all users by enhancing our ability to manage these navigations in a more pro-active manner”.

Noting that “no changes have been made to the regime for some 24 years”, she said there would be new permits for visiting boats to use the canals free of charge for up to 30 days and for houseboats, which would be charged between €600 and €3,500 a year. There would also be an extended mooring permit ranging from €160 to €1,600 annually.