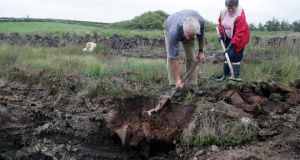 Many turf-cutters have now stopped cutting, or relocated their cutting to an unprotected bog. Photograph: Eric Luke

The now perennial summer bother on Ireland’s raised bogs between turf-cutters and conservationists, which has flared up again in east Galway and Roscommon in recent weeks, is often presented as a stark battle between good and evil.

If you are a turf-cutter, understandably aggrieved by radical restrictions being imposed on a traditional practice, the baddies are the Brussels bureaucrats, their agents in the National Parks and Wildlife Service (NPWS) and their green friends.

If you are a conservationist, aggrieved (equally understandably) by the extinction before our eyes of a unique native ecosystem, the baddies are the turf-cutters – too greedy, or too ignorant, to properly value what lies beneath their feet.

This conservationist argument – though not its characterisation of turf-cutters – has a lot of science on its side. The diverse life of our midlands raised bogs is sustained by a structure evolved over centuries, a structure which is moulded by and facilitates a complex hydrology, or water cycle. Cut into the bog beyond a certain point and that hydrology collapses forever.

With that collapse, we lose not only unique and precious forms of biodiversity, but also valuable “ecosystem services” like carbon storage and flood control.

Hang on right there, says the turf-cutter, the most valuable service the bog provides is fuel to heat my home, and that’s the only fuel I can afford in these straitened times. The conservationist cares about plants, the turf-cutter says, and neglects human beings. And besides, he or she will add, my cutting on my half-acre will never destroy the whole bog.

Bigger picture
This latter argument recalls what Garrett Hardin memorably called, in a seminal 1968 article, the “tragedy of the commons”. Hardin argued that, if the short-term benefit to every farmer of putting one extra cow on common land is significant, each farmer will put another cow on the commons. And they will do that even though the collective impact of the extra cows will degrade the land. All the cows will then starve. Ultimately everyone is hurt. But each farmer will say that it is not her or his extra cow doing the damage.

Many turf-cutters are often equally reluctant to accept that it is his or her spade that will deal the deathblow to a much-loved bog. It must, however, be said – a point often missed in the heat of debate – that many turf-cutters have already accepted the compensation on offer, or relocated their cutting to an unpreserved bog, or simply stopped cutting because they don’t want their bogs to die.

Sadly, the most imaginative solution put forward – that turf-cutters might be paid to use their skills to become stewards and restorers of healthy bogs – has hardly been explored at all.

Meanwhile, the defiance of the “diehards” attracts a lot of sympathy. Understandably so, because it reflects deeply rooted elements in our culture: a tradition of resistance to authority, especially to remote authority; a perceived urban/rural divide; a reverence bordering on idolatry for private property; and a corresponding widespread reluctance to fully embrace any principle of the common good. For many of us, the real circle of social solidarity does not extend much further than our own families.

These elements are easily manipulated by populist politicians. They are also used on the bogs to cloak the real interests of commercial private contractors, who persist in extracting far more turf than they need for their own domestic uses.

But these facts do not invalidate the arguments of the traditional turf-cutters. And some of them have a good right to feel aggrieved by the shabby treatment they have sometimes received from the authorities in this sorry saga, which has dragged on for far, far too long.

It was in 2002 that the NPWS designated the last of 53 raised bogs as special areas of conservation (SACs), where turf-cutting would have to cease, under the terms of the EU habitats directive.

But the chronically overstretched NPWS had neither the resources nor the professional capacity to engage the affected communities in discussions about why this major change in their lives was necessary, or to seriously consider their alternative proposals. Its many committed professionals know this, and it breaks their hearts. Meanwhile, the relevant minister of the day, Síle de Valera, had gravely undermined the NPWS position throughout the designation process. She granted “derogations”, of dubious status under EU law, whereby people could continue cutting turf on many of these sites for another decade.

The depressing message she sent out, echoed by far too many other local and national politicians since then, is that Ireland only accepts EU conservation directives with gritted teeth, instead of welcoming them as an opportunity to cherish our own heritage. The result has been rapidly increasing degradation of the vulnerable bog sites, for which the European Court of Justice has made adverse judgments against Ireland.

The Minister responsible, Jimmy Deenihan, has made a much clearer commitment to bog conservation than his predecessors did, while remaining sensitive to the turf-cutters’ concerns. He has taken a series of initiatives to resolve the dispute. The latest is the Scientific Study for Raised Bog Conservation, which aims to produce agreed conservation plans for every designated site – by March 2015.

Digging for a solution
That’s right: it will have taken more than 15 years, in most cases, to move from deciding to conserve a bog to deciding, in agreement with the affected parties, how this should be done. The lesson is clear: when conservation measures are needed, resources must be found to ensure that a full engagement with stakeholders takes place at the beginning of the process, and not at the bitter end.

Paddy Woodworth’s forthcoming book for University of Chicago Press, Our Once and Future Planet: Restoring the World in the Climate Change Century, has a chapter on bog restoration in Ireland