Restrictions introduced at Bettystown but removed at Clogherhead 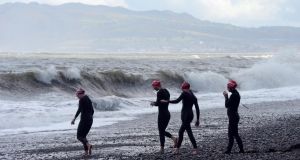 Bathing bans have been introduced at several beaches along the east coast due to poor water quality results . Many of the samples were taken on Monday following a weekend of extremely heavy rain.

Bathing has been temporarily suspended at the popular Bettystown beach in Co Meath due to elevated levels of bacteria.

In a statement today Meath County Council said the prohibition was in place until results of a new sample become available tomorrow. Confirmed results were released yesterday from a sample taken on Monday. The council said the cause of the elevated results was “under investigation”.

In submitting the results to the Environmental Protection Agency (EPA) the council chose “agricultural runoff” as the possible reason for the elevated bacteria. The council said ‘no swim’ notices had been put in place along Bettystown beach.

Nearby in Co Louth the council this afternoon lifted five-day bans introduced yesteray at Clogherhead and Templetown beaches due to abnormal water result following heavy rain. This follows analysis of water samples taken on Tuesday which show water quality is back to an acceptable standard.

Bathing bans are still in place at five Dublin beaches. At Killiney Beach and Sandycove Harbour in south Co Dublin bathing bans were introduced yesterday after elevated bacteria levels were shown in samples taken on Monday.

Dun Laoghaire Rathdown County Council said it will know tomorrow if swimming can resume at these spots as as it will receive results from water quality samples taken yesterday. The council said it is investigating but has not yet determined the cause. In submitting the Killiney result to the EPA the council chose suspected contamination from extreme water or flooding as a possible cause.

In the north of the county, Fingal County Council on Tuesday introduced bathing restrictions at Claremont Beach in Howth and Loughshinny Beach due to a poor microbiological result. It is awaiting further test results.

In its August newsletter released today the EPA said recent extremely heavy rain had resulted in restrictions at a number of bathing waters, mainly in Dublin. “ Such actions are essential to ensure that the risk to the public of contracting gastro-intestinal illness as a result of bathing is minimised,” it said.

This report showed that Irish bathing waters were 10th among 30 counties in Europe reporting to the European Environment Agency.