Bathing ban introduced on Cork beach due to bacteria 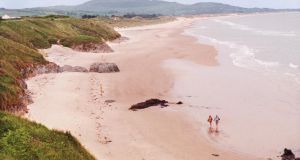 Wicklow Country Council has ruled out sewage as a factor in the poor water quality for Brittas Bay. Photograph: Matt Kavanagh/The Irish Times

A bathing ban has been put in place at a Co Cork beach today after test results showed elevated levels of bacteria in the water.

Runoff from the hinterland surrounding Garryvoe Beach was the likely cause, according to the notice issued by Cork County Council today.

The council will take a further water sample for retesting and has notified the HSE. Test results issued today were from samples taken after the bank holiday weekend on Tuesday.

The mixed pebble and sand beach gets an average of 500 visitors during the bathing season. The lifeguarded beach is off the road from Ladysbridge to Shanagarry in Ballycotton Bay and used to have a blue flag. It is quite open to rough weather and rough seas.

Separately Wicklow County Council has ruled out sewage as a factor in the poor water quality for Brittas Bay. Yesterday it put in place a bathing ban for the popular east coast swimming spot.

The council said the reason for the result was not known. “It was noted at the time of sampling that the sea was quite choppy and churning up sand, so this may be a factor,” a spokesman said today.

The area was not sewered so a sewage outflow from a public sewer “could not be a factor”, he said. The area was served by septic tanks and private sewage treatment but there was no direct discharge into the seawater or the nearby stream.

The spokesman said the rain may also be a factor. Heavy rainfall results in “increased run-off from land with the potential to transport microbiological pollutants diluted with rainwater to the sea via surface water or ground water, so this could not be eliminated,” he said.,

The ban on the north Dublin beaches is due to “storm water overflow” and follows the failure of sewage pumping stations across the north of the county due to heavy rain over the bank holiday weekend.