Campaigners say scenery, health and belief in politicians would all suffer 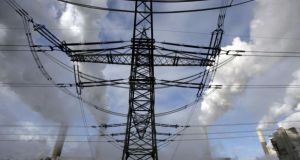 Eirgrid has been accused of range of failures in relation to public consultation on its plans for new power lines. Photograph: Wolfgang von Brauchitsch/Bloomberg New

Electricity transmission operator Eirgrid has been accused of range of failures in relation to public consultation on its plans for new power lines.

Anti-pylons campaigners from five separate groups across the south and north east, told TDs and Senators at the Oireachtas Communications Committee that Eirgrid was incorrect when it claimed to be operating in a transparent way.

The North South Interconnector is to link Co Meath with Co Tyrone while a second line would link Co Kildare to Co Cork via Co Wexford. A third power line would link Co Mayo to Co Roscommon. Eirgrid has said the power lines are necessary to develop and upgrade Ireland’s electricity transmission grid.

But Cian Moloney of campaign group Action D9 in Co Wexford said Eirgrid had failed to adequately consult landowners in the southeast. He claimed Eirgrid had opened a “side street office” in New Ross “for six hours on a Wednesday afternoon”. As a result he said “landowners did not know their land was being proposed” .

Owen Bannigan of the Monaghan Anti-Pylon Committee said Eirgrid’s attitude was “there is going to be a pylon in your field, where would you like it”. He said the semi-State company had failed to engage with with complaints that pylons were not wanted anywhere. The attitude was : “that is not an option”, he said.

Mr Bannigan said “local communities are having to find these things out themselves” and he warned the TDs and Senators “people see politics as failing the people”.

Nigel Hills also of the Monaghan Anti Pylon Committee there was international experience, particularly between France and Spain, of putting such cables underground. He said Eirgrid was failing to adequately consider such a move.

Labour deputy Ann Phelan said “the public have no confidence in Eirgrid anymore” and she asked why Eirgrid would not consider putting the cables underground alongside motorways or railways.

Ann Murphy of Co Wexford told the committee New Ross was a town heavily dependent on tourism and the pylons could come with 500 metres of the town. She said the border of Wexford and Carlow was a glacial valley and recognised for its beauty and she accused Eirgrid of failing to take tourism into account.

Helena Fitzgerald of Save Our Heathland, Carlow said Ireland was a party to the EU Landscape Convention. She said the State and Eirgrid had failed to consider how this should affect policy.

John McCusker of the Comeragh Action Pylon Group said said Eirgrid failed to attend public meetings which was “in total contrast to the spin that we hear”.

The committee was told Eirgrid would be given a chance to respond to the criticism next month.