Another Life: When snails and slugs scrape supper off a fox’s dropping

Dogs are catching ‘lungworm’ from molluscs infected with the potentially fatal Angiostrongylus vasorum. So many Irish foxes are infected that our pets are at serious risk 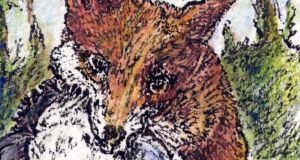 My first meeting with a fox came on a walk along the grassy rim of the shore on New Year’s Day, just 38 years ago. The date has stuck in my mind, along with the animal writhing and bloody in the gin trap, a steel device with jagged sprung jaws, and chained to a peg in the ground. Also unforgettable is what then seemed the only thing to do, with a club of driftwood from the strand.

Gin traps, presumably, have gone to museums of the creepy, medieval kind. They were succeeded in the lambing season by baits of meat laced with strychnine and now, such poisons made illegal, by late-night patrols in four-by-fours with assorted guns. Even from the road a powerful mounted spotlight can pick up the glint in a fox’s eyes.

Daytime glimpses have always been rare in sheep-farming country. The sight of one trotting along the shore, pursued by a pair of grey crows, fitted the stitching of fox tracks along the morning tideline, always ahead of my own. Nor did I see the fox that took all six of our hens on the evening I forgot to close them in. Their bones and feathers littered the feasting place up at the mountain fence.

A good many foxes have now moved into town, to feed from dog dishes, compost heaps, bin bags, bird-feeder peanuts, the earthworms of well-nourished lawns. Readers send photographs of casual daytime encounters in Dublin’s leafy suburban avenues, and foxes seeking holes for dens have, reportedly, had a strange attraction to Dáil Éireann.

Only rarely now does anyone seem to worry about the risk to cats, or to little pet dogs no bigger than rabbits. Perhaps town offers too many easier takeaways. A new and much wider risk, I now learn, is the fatal infection of dogs by a parasite carried in foxes, advancing worldwide and lately confirmed in every Irish county.

Poor Vulpes vulpes is, it seems, prone to carry a litany of diseases, with new ones added all the time. Ireland has, mercifully, escaped rabies, the one fox-borne disease that, through a bite from an infected dog, could be so cruelly fatal to humans.

This, it’s worth recalling, spread from Russia through postwar Europe, which was teeming with feral dogs and countless foxes, until it reached France in 1968. It remained a problem there for 30 years until finally controlled, at least in western Europe, by a vaccine. A German friend, a vet, spent his “national service” stuffing vaccine into chicken heads scattered by air across great tracts of European countryside. There are also now vaccines for dogs, and for human travellers to far-flung, unpasteurised places.

The new risk to dogs comes from Angiostrongylus vasorum, a nematode infesting heart and blood vessels that supply the lungs. It has been spreading globally from former well-defined, endemic areas to infect both wild and domesticated canids. Its prevalence in 40 per cent of Irish foxes, sampled right across the Republic, is more than double the rising UK figure and the second highest in Europe. This has been established by Dr Grainne McCarthy and colleagues in the school of veterinary medicine at University College Dublin, in the country’s first such survey.

Alerted by a sudden trebling in the cases of dog “lungworm” reaching their veterinary hospital, echoing similar increases in the UK and Europe, the team dissected hearts and lungs from 542 foxes, gathered from every county. The sample was related to Ireland’s total fox population, estimated at between 150,000 and 200,000. Infection by the nematode ranged up to more than 70 per cent in Co Clare, but the overall national prevalence is put at 39.9 per cent. (For an online summary search “Geographical distribution of Angiostrongylus vasorum in foxes – NCBI”.)

Dogs catch the parasite from foxes through garden slugs or snails, eating them accidentally, or from grass they have travelled, or from licking their slime tracks on dog dishes left outside the back door overnight. The molluscs have picked up the parasite in larval form through scraping a supper from fox droppings (finger length, twisted, wispy ended).

Passed into dogs, the larvae grow into adults, up to 2cm long, that in turn lay eggs in the major blood vessels supplying the lungs and heart. The larvae from these, coughed up and swallowed, end up in dog droppings, completing the cycle back to slugs and snails. The harm to dogs varies, but breathing problems and internal bleeding can eventually prove fatal.

The risk of this cross infection is reckoned “high” and “serious” in publications by McCarthy and her team. For dog owners they urge closer control of garden slugs and snails – and, of course, their coprophagic scrape-aways – and keeping the dog’s dish and water bowl indoors.