Another Life: St Patrick and the puzzle of Ireland’s snakes 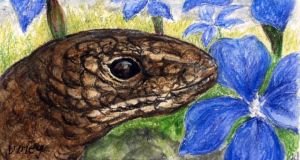 Legless lizard: a slow-worm among gentians in the Burren. Illustration: Michael Viney

The sun cleared the mountain as I walked out, flinging my silhouette at sudden length down a rushy field. The summit’s last shreds of snow were shared with Croagh Patrick, around the corner, and that, with this saintly weekend approaching, steered my thoughts to the likely survival of serpents on our hills.

The adders of Sussex must be stirring out of hibernation just now on the dry, warm and chalky South Downs behind Brighton, my natal city – not, it should be said, to anyone’s immediate alarm. A few years ago, it’s true, at Devil’s Dyke, the high vantage point above the city, a man’s pedigree dog got bitten on the tongue, which wasn’t good. And, over at Lewes, a dedicated wildlife rescuer got bitten twice after disentangling a pair of adders from allotment netting. He became critically ill: his blood-pressure medication made him uncommonly vulnerable to venom.

Britain’s only venomous snake, the adder, Vipera berus , can indeed resent being sniffed at or manhandled, and the UK’s Health Protection Agency had nearly 200 reports in two recent years of people being bitten, none fatally. On my own downland ramblings I steered clear of the brackeny patches, thus missing the chance both of being bitten and of actually seeing this reclusive and beautifully zigzagged viper.

There is no climatic reason why the European adder should not flourish in the Ireland of today. It is the only snake to be found within the Arctic Circle, wintering deep in the crevices of rocky escarpments and basking in enough seasonal sun to have the energy to hunt, mate and reproduce. It could not have survived the final Irish glaciation of the Ice Age, but nor have the right cave bones turned up to suggest it ever lived here. When warmth and sea returned it simply hadn’t slithered north fast enough to beat the resurgence of the sea.

As Nigel Monaghan, keeper of the Natural History Museum, once said, St Patrick never personally claimed credit for ridding Ireland of snakes. “But when you’re selling a brand,” he added, “you don’t bother with the detail.” The notion of the saint casting the snakes to oblivion – or at least from Croagh Patrick into the lake below – some time in the fourth or fifth century did not inspire Ireland’s religious myths until several centuries after his death.

Dr Declan Quigley of Dingle Oceanworld, more widely known for his expertise in strange things from the sea, recently reviewed the history of Ireland’s snakes in Lacerta , the journal of the Herpetological Society of Ireland. He found scholarly and anecdotal references to Ireland’s lack of snakes as early as the third century. Even Giraldus Cambrensis, author of the 12th-century Topographica Hibernica and not above lapsing into fantasy himself, was blunt in dismissing the St Patrick legend, though, as he wrote, “it does appear very wonderful that, when anything venomous is brought there from foreign lands, it never could exist in Ireland”.


Adders in Ireland
Were there any attempts to introduce adders to Ireland? Quigley’s research suggests some “possibly” sold as pets in modern times by shops along the Dublin quays. The most sustained introductions to the wild, however, were of small grass snakes from the UK during the 19th century, including “some hundreds” to a demesne in Co Waterford. These, he notes – with justified surprise, given that the species ranges as far north as Norway – failed to establish a self-sustaining population.

The only serpent-shaped aliens to have succeeded in Ireland so far are the bronzed and burrowing slow-worms, Anguis fragilis , which are not snakes at all but legless lizards, emerging about now among the rocks of the Burren, in Co Clare. These were first reported in 1977, a time when New Age travellers from England were seeking seclusion in the limestone wilderness. A survey by Wildlife Service ecologists in 1999 acknowledged a popular belief that the travellers had brought the lizards with them, perhaps as pets (as they were, indeed, among some of my schoolfriends).

A gathering of 89 slow-worms of all sizes (up to a 26cm male) from some 17sq km of limestone pavement, hazel scrub and grassland was then enough to show a healthy and widespread breeding population. More recently, Eye on Nature reported one dropped by a bird, putting a small dent in the roof of a car parked in a Galway suburb.

Quigley’s serpentine history suggests that pet snakes became “a fashionable ‘must have’ during the Celtic Tiger”. A staggering range of species is now on offer, he writes, at up to €19,000 “for a top-end colour-morph python”, but the cost of keeping them has now led to “escapes” that might prove dangerous, however short- lived. The Herpetological Society of Ireland, it should be said, now with free membership, offers serious study of reptiles and amphibians. It also advises on home comforts for pet boa constrictors, such as thawing frozen mice before serving.