Another Life: Seals make their presence felt in Irish water

It is great to see grey seals return in numbers, but it is best to enjoy them from a distance 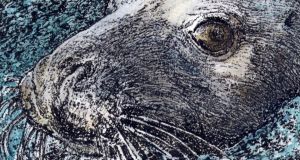 Seal of approval: they are amiable but keep your distance. Illustration: Michael Viney

The distant, Labradorian regard from a grey seal or two will furnish a holiday memory for many who walk the cliffs and coves of the Wild Atlantic Way this summer – that and the cavernous echo of a breaking wave and the jewelled tints in the shadowy depths if the sun just happens to shine.

The closer acquaintance of swimming with seals, while rated highly for excitement, is most sensibly left to experienced sub-aqua divers or snorkellers in the crystal-clear waters of the west. On the sandy east coast, where grey seals roam out from a base on Lambay Island, there is growing interaction with swimmers in Dublin Bay, where things have not always turned out well.

Irish Water Safety, with the Irish Seal Sanctuary, have posted a warning on the subject. They grant the “amiable behaviour” of seal approaches to humans, now quite frequent at the Forty Foot and at Seapoint and sometimes to the alarm of novice swimmers with weak hearts. They will even grant the “playfulness” of seals that nibble divers’ fins, but warn that accidental scrapes from flippers or seal teeth carry the risk of a bacterial infection, sometimes known as “seal finger”. Actual nips at dangling toes have been reported from the Forty Foot.

In general, the public are urged to enjoy seals “at a distance” but not to feed them. Fishermen and fishmongers at Howth, Dún Laoghaire and other harbours in the east and south are apparently throwing fish to seals “to the entertainment of the public”, thus confusing the animals’ inherent “boundaries of behaviour.”

Somewhat unjustly, the injunction not to feed the seals is also extended to anglers whose catch they may intercept – this, as if one would willingly cast expensive spinning lures into the throats of thieving pinnipeds. The sudden, shining apparition of a seal, rising from the deep to snatch my pollack, along with the three-hooked metal sprat, is still vivid half a century after a sojourn on Inishvickillane (before the late Charles Haughey bought it).

The grey seals of the Blaskets – now numbering around 1,000 – have come under special study for their consumption of salmon and sea trout in the food-rich waters of the islands.

Given the long hostility of fishermen to seals, finding out exactly what they eat has been a long-standing challenge to marine biology.

West coast salmon are continuing to decline, long after the ban on drift-netting and other conservation measures. While climate change may offer more final explanations, the fish-farming industry suggests losses of salmon to seal predation of up to 20 per cent of the harvest at some sites and of double that to the potential catch by rod-and-line in some rivers and estuaries.

The few studies of Irish grey seal diet, in the 1990s, found a wide variety of prey, varying between seasons, but no evidence of salmonid remains. A quite new picture emerges from a study by a team of marine scientists at University College Cork, using evidence from droppings (or scats) recovered from the big sandy beach of Trá Bán on the Great Blasket. They yielded fragments of more than 900 prey items, ranging over at least 40 species, with salmon and sea trout comprising more than 36 per cent of diet.

The big problem with such analysis is the huge variety of bits and pieces from so many different kinds of seafood. Some species, such as cartilaginous rays and dogfish, lack the hard and distinct otoliths, or “earbones” on which identification can depend. In others , such as salmon and herring, the otoliths and other bones can be too fragile to survive for detection in the scat.

Putting the more intact otoliths and squid and octopus beaks aside, the Cork team, led by Martha Gosch, took the microscope to fragments under a centimetre – even to the eye lenses of octopuses and minutely differing fish vertebrae.

Deciding from all this not only the species – cod, haddock, pollack, ling, saithe, blue whiting, herring, sandeels, dragonets, wrasse, mackerel, dover sole, hake (I’ll stop) – but also their probable length and biomass was a notable undertaking. It has highlighted, say the team, “the importance of using multiple diagnostic features”.

Some recent predatory behaviour by grey seals in the heavily fished North Sea has provided a certain grist for human alarm, especially in the silly season. Dutch marine scientists have shown evidence that many of the harbour porpoises washed up dead on their coast were mutilated by grey seals: could people be next?

As it happens, both the Blaskets and Dublin Bay are special conservation areas for porpoises, but the seals appear to have plenty of other things to eat.

As to the true intentions of those at the Forty Foot, we must treasure a heading in the Irish Independent in August 2009: “Sex-starved seals prey on bathers.” And this wasn’t even in the breeding season.