Another Life: From dinosaurs to sea lilies, the fossil windows into our natural history

Limestone formed when Ireland was still down near the equator, its deserts and dunes flooded by warm and shallow seas 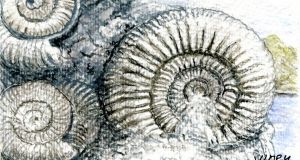 Imprints from the past: successive ice ages and weathering have left the fossils of early limestone Ireland’s chief visible heritage. Illustration: Michael Viney

The first Irish fossils to catch my eye shone out from a big panel of dark and highly polished limestone, spotlit beside the desk of Michael Scott, the eminent Dublin architect, in his Merrion Square office of half a century ago. The stone’s gleaming galaxy of crescent moons and planets, Saturnian rings, was beautiful and covetable.

In the limestone pillars of Dublin’s old banks and public buildings, fragments of marine fossils are mere pale flecks of interest, even when the stone is dark with rain. Lacking Scott’s dazzling display, one needs a few chunks in the hand really to connect with the ancient oceans and their animals.

Those on my window sill, picked almost at random from a mass of limestone rubble above a windy Sligo shore, offer fluted tropical corals, tightly and communally bunched, others tangled in a fistful of miniature lives that needs a magnifying glass to explore. Among them are stems of crinoids, the “sea lilies” that were animals related to the modern starfish, and the odd little brachiopod, an early, cockle-like mollusc.

The supremely rapt chronicler of Ireland’s limestone fossils, as of so much else in the Connacht landscape, is Tim Robinson, parsing the iconography of their fractured forms. In Stones of Aran: Labyrinth (Lilliput, 1995), the second of his volumes on Aran, his step-by-step exploration of the island finds the ghost of a large nautiloid among the corals, a coiled cephalopod ancestrally related to the squid. The intensity of his description sets him off on a typical, rhapsodic riff about the flow of the early oceans amid the splits and drifts of continents.

Dated to more than 385 million years, and discovered only in 1992, they mark the progress of a salamander-like creature, plodding through ancient mud – one of the first vertebrate animals to walk on land.

Two more notable footprints, from an early, lizard-like ancestor of dinosaurs, were recovered from the sandstone slope of an abandoned quarry in Scrabo Hill, Co Down, in 1938. They belonged to the Triassic, a further period of deserts and flash floods. That was followed by the Jurassic, starting about 213 million years ago, in which shallow, muddy seas returned, together with fierce marine reptiles and, on land, dinosaurs.

Over most of Ireland the sedimentary rocks of the later periods were scoured away by successive ice ages and weathering, leaving the fossils of early limestone the chief visible heritage of the past.

Virtually all of the rocks of the 180 million years up to the extinction of the dinosaurs – the Mesozoic, or “middle life” – occur in Ulster.

It’s at a thin strip of foreshore of Co Antrim and Co Derry that fossils of the earliest Jurassic rocks have brought the most excitement. There have been only mere traces of dinosaurs – isolated fragments of bone – but an ichthyosaur, like a huge early dolphin, was excavated north of Larne in 1999 and, later, parts of a plesiosaurus, another marine predator with a long, wavy neck and huge flippers.

Waterloo Bay at Larne, with Jurassic rocks 200 million years old, has such an abundant supply of specimens that geologists have run educational public fossil hunts – if not for ichthyosaurs then for ammonites, the beautifully coiled and ribbed molluscs related to octopus and squid, more famously wrested from mudstone beneath eroding cliffs in Dorset.

As John Faulkner relates in his monumental The Natural History of Ulster (National Museums North of Ireland, 2011), Ireland’s finest Jurassic locality, near Garron Point on the Antrim coast, was lost to students and collectors when a road engineer sealed the slope of oozing mud with massive boulders and concrete. “The irony was,” writes Faulkner, “that he worked in the self-same government department charged with its conservation.”

Marine life sealed in sediments accounts for only part of Ireland’s fossil record. Fossil pollen and seeds from lake beds, plant leaves pressed in coal, and ancient animal bones recovered from caves and bogs have all been essential to the fabric of Irish natural history.

The pale shapes gleaming from limestone, however, are more often what catch the eye. A basic guide aimed at the young but grist to any inquiring mind is Discovering Ireland’s Rocks and Fossils, by Adam Stuart Smith and Patrick Wyse Jackson, published by Trinity College in 2009 and downloadable online.