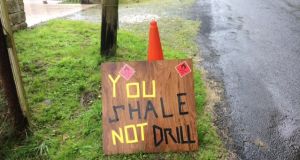 Anglers and canoeists held a rally at a Border lake on Saturday in a bid to put pressure on political parties to support a Private Member’s Bill to ban fracking.

Anglers and canoeists held a rally at a Border lake on Saturday in a bid to put pressure on political parties to support a Private Member’s Bill to ban fracking.

Fine Gael TD Tony McLoughlin’s Bill is due before the Dáil this Thursday.

The issue is getting international attention, and a related social media campaign by the Love Leitrim group has been supported by a number of celebrities.

Bianca Jagger and musician Glen Hansard are among those who have re-tweeted the group’s message to “Back the Bill”.

The Love Leitrim group has also exchanged messages of solidarity with the Standing Rock Sioux tribe in the US, who are protesting against the construction of the 1,800km Dakota Access pipeline in North Dakota, which they say is a threat to their water supplies and sacred sites.

On Saturday morning, dozens of anglers carrying “Back the Bill” banners gathered on the shores of Lough MacNean on the border between counties Leitrim, Cavan and Fermanagh, while a number of canoeists and stand-up paddlers took to the water in support.

Mr McLoughlin said he believed that a long-awaited EPA report on the environmental impact of fracking, which campaigners have described as “deeply flawed”, will be published at the end of November.

The Sligo-Leitrim TD said he was “very, very hopeful” of getting all-party support for his Bill, which is due to be discussed by the Cabinet on Tuesday.

Angler Eamon Murray, who attended Saturday’s rally, said there was a lot of fear in the Border area about what would happen if mining companies get the go-ahead for fracking.

“If there is an accident - and on the law of averages that is fairly likely - the damage done would be irreversible,” he said.

“We are not people living in caves. We know we need electricity and fuel, but we should look at the least risky method.

“We do not own the land, we only have use of it until the next generation comes along, and we do not want to be the generation which lets it be destroyed.”

Film-maker Johnny Gogan, the chair of Love Leitrim, will be among a number of campaigners in the Dáil on Thursday.

He said there had been a lack of governance on the issue, with governments “kicking [it] to touch” and hiding behind the EPA report.

He urged supporters to contact TDs in every constituency in advance of Thursday’s two-hour debate on the Bill.

Eddie Mitchell, of Love Leitrim, said: “This is our time to make history. This is what we have been aiming for, a ban in fracking.”

Leitrim farmer Michael Gallagher (70) said he was very disappointed that the IFA had not taken a stronger stand on fracking.

Mr Gallagher said that as a father and a grandfather he felt he had to take a stand.

“You do not come to Leitrim to get rich. It is bad land.

“Our wealth is our people and and our scenery and our rivers and lakes and our clean water.”

A spokesperson for Minister for Energy and Natural Resources Denis Naughten said the Government was supporting the Bill but that the department was awaiting the EPA report.