Ancient oak track on Galway coast dated to 1700 BC 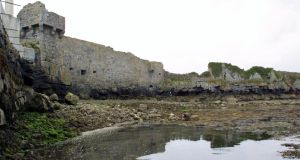 The remaining walls of Arkin’s Castle on Inis Mór, stonework from which been exposed by storm surges which burst through the castle’s sea gate. Photograph: Joe O’Shaughnessy

Galway Bay could be a “younger” geological formation than previously estimated, following precise dating of a fragment from an ancient oak trackway uncovered on its northern shoreline. Analysis of the fragment found near the “togher” or oak trackway discovered earlier this year suggests that the structure was built about 1700 BC.

Seán Ó Coistealbha of Muintearas in Spiddal, Co Galway, who submitted the fragment to a British laboratory for radiocarbon dating, says it means the bay as we know it could be less than 3,700 years old

The trackway or possible ceremonial platform would have been built when the sea level was rising and gradually enveloping forests and lagoons, he says. “The old people around here always referred to Galway Bay as Loch Lurgan and some people might joke about that, but it suggests that they were right,” Mr Ó Coistealbha says.

The oak trackway was discovered on the shoreline between Furbo and Spiddal by a resident, Alan Keogh, last spring, who alerted NUI Galway geologist Prof Mike Williams. Prof Williams has done extensive research on the topography of the area, including the 7,500-year-old “drowned forests” uncovered along the Atlantic seaboard during last winter’s storms.

Archaeologist Michael Gibbons says that the trackway would have been built on top of a bog on what was then a freshwater environment in the early-mid Bronze Age – with sea level rising significantly to flood what is now Galway Bay after 1700 BC.

Mr Ó Coistealbha says he has recently been informed by the National Museum of Ireland that a preliminary survey of the trackway will be conducted. However, he is concerned that hot weather forecasts over the next few weeks may cause further damage to the track, which would have been protected by sea, sand and stones cover it until exposed by the winter sea surges.

In a related development, further significant evidence thrown up by the winter storms has been recorded at Caisleán Aircín, or Arkin’s Castle, on the Aran island of Inis Mór by Mr Gibbons.

Stonework from a 12th-century Romanesque church, which may have been recycled by Cromwell’s troops, has been exposed by storm surges which burst through the Arkin Castle sea gate, Mr Gibbons says. The surges “sluiced out” deposits from within the castle, which was originally a 6th-century monastery, before it became a stronghold for Gaelic chieftains, then Elizabethan forces and latterly a 17th-century Cromwellian fort.

“Inis Mór was the main port for Galway, controlled by the O’Briens and O’Flahertys, who were paid 12 tons of wine a year by Galway city merchants,” Mr Gibbons says. “The medieval harbour below Arkin’s castle would have formed part of that Gaelic monopoly which the Elizabethans then tried to break.”