An Taisce complains after foundations dug at National Museum 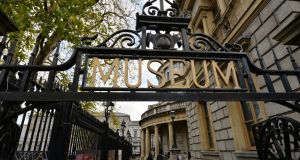 An Taisce argues that housing the Seanad at the National Museum would represent a change of use for the museum. 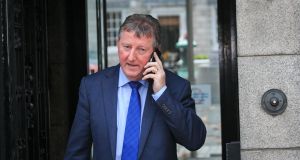 Minister of State in charge of the OPW Seán Canney said in a written response to Tommy Broughan his department “has no function in the determination or management of the accommodation requirements of the Houses of the Oireachtas or of the National Museum of Ireland”. Photograph: Gareth Chaney Collins

An Taisce has made a second complaint to Dublin City Council in relation to the proposed temporary relocation of Seanad Éireann to the protected National Museum building.

Under Government plans for the refurbishment of the existing Seanad chamber in Leinster House, Senators would move to the National Museum’s ceramics gallery on Kildare Street for up to two years. The cost of the move is in the region of €1.5 million.

The move would necessitate breaching the external wall of the museum in at least three places to facilitate an entrance/exit for Senators and the public. It has also been proposed that a lift would be attached to the facade of the building.

Under the planning system, many minor works to protected structures like the National Museum do not normally require planning permission. These works are known as “exempted development”.

However, for a protected structure, such works can only be carried out without planning permission if the works would not affect the character of the structure or any element of the structure that contributes to its special interest.

The Office of Public Works (OPW) made a submission to Dublin City Council on October 17th in which it outlined its proposal and sought clarity on whether the work can be considered exempted development. A decision has yet to be made on the matter.

That application was made on the same day An Taisce drew the attention of planning officials in Dublin City Council to the proposed development. It argued that housing the Seanad would represent a change of use for the museum, and so the work would require planning permission.

On Tuesday, a second complaint was made by An Taisce, this time in relation to the digging of a foundation pit for the proposed lift. “The pit was dug in the absence of either planning permission or an exemption,” it said on Wednesday.

“This building is a high profile protected structure and yet there had been no planning permission granted, no exemptions granted, or indeed even any planning applications made.

“Furthermore, imminent interior structural alterations have been flagged for three rooms in the National Museum.

“The structural alterations to these rooms will result in the loss of public amenities such as a Viking-themed audio-visual display. The museum has no spare space for the temporary convenience of vagrant Senators.”

In a written reply to Independent TD Tommy Broughan, the Minister in charge of the OPW Sean Canney said his department “has no function in the determination or management of the accommodation requirements of the Houses of the Oireachtas or of the National Museum of Ireland”.

In response to a request for comment in relation to the latest development, a spokesman for the OPW declined and said he would forward the request to the Houses of the Oireachtas.

Dr Mark Clinton of An Taisce’s monuments and antiquities committee said there were “ready-made alternatives available” to the Seanad within the grounds of the Oireachtas.