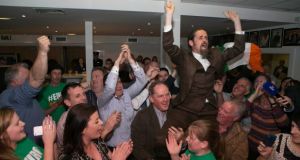 The battle for the final seat in the Midlands North West constituency is set to go down to the wire tonight after a huge transfer from Fianna Fáil running mate Thomas Byrne brought Pat the Cope Gallagher to within 2,500 votes of independent candidate Marian Harkin.

The destination of the fourth seat will be decided by the surplus of Sinn Féin’s Matt Carthy who was elected an MEP on the seventh count. The 37-year-old Monaghan man becomes the third Sinn Féin MEP to be elected in the State - his Sinn Féin colleague in Northern Ireland, Martin Anderson, topped the poll in that constituency.

Ms Harkin remained the slight favourite as counting started on the seventh count. But with the prospect on only several hundred votes between the Sligo MEP and Mr Gallagher when the count is completed, the likelihood of a recount has increased.

Mr Carthy was elected shortly after 9pm on the third day of counting in this vast constituency which encompasses 15 counties.

He received a transfer of some 7,911 votes from Mr Byrne following his elimination, bringing him over the quota of 129,290 with a surplus of 5,756.

It is expected that a majority of Mr Carthy’s surplus (which is comprised of transfers from Mr Byrne) will go to Mr Gallagher but he will need some 80 per cent if he is to overtake Ms Harkin.

Earlier this afternoon, Fine Gael’s Mairead McGuinness was elected on the fifth count for her third term in the European Parliament. She benefitted from a massive transfer from her Fine Gael colleague, outgoing MEP Jim Higgins, who conceded victory early today.

The Independent TD Luke Flanagan was elected on Monday after topping the poll and almost reaching the quota of 129,290 on the first count.

As counting of votes in the the seventh count continued in Castlebar tonight, Ms Harkin looked like she had established a sizeable enough lead over Fianna Fáil MEP Pat The Cope Gallagher to prevent him overtaking her in later counts.

But Ms Harkin and her team remained confident they would win the last seat, depriving Fianna Fáil of a seat in this part of the country for the first time since the parliament was established.

A large crowd of Sinn Féin members and supporters arrived in the hall to congratulate Mr Carthy upon his election. They included Donegal TDs Padraig Mac Lochlainn and Pearse Doherty.

In media interviews earlier, Ms McGuinness said she believed that the situation in the European Parliament was complex at the moment but it needed strong representation. She said that she along with Fine Gael colleagues believed that citizens had responsibilities, as well as rights.

Asked about Mr Flanagan she said she was not sure what his agenda was but said that the parliament was about people who work together.

For his part, Mr Flanagan told The Irish Times that his criticism and questioning of the EU’s motives and roles could not be compared in the same breath to that of UKIP in the UK. He contended that scrutiny of the institutions was not only in the preserve of those on the right wing but also came from the left, and from ordinary people with no ideological bias. He said his campaign had reflected those concerns.

Ms Harkin said she was far more optimistic than she had been 24 hours earlier about her chances in what will be a very tight contest with Mr Gallagher. She said it was much harder for an independent candidate to get an equitable proportion of media coverage and also criticised the decision to allow political broadcasts of three minutes on RTÉ for parties but not for independents.

If Fianna Fáil lose out, there will be recriminations about its strategy of running two strong candidates. Mr Gallagher was opposed to the candidacy of Mr Byrne on the basis that both were too strong and would effectively cancel each other out. His view seems to have been borne out by the count so far.