Welcome to the future of words: the printed dictionary

Do we need heavy printed dictionaries any more in the age of digitised information? Perhaps more than ever 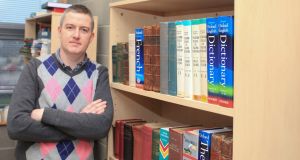 Chris Mulhall: a paper dictionary, although heavily mismatched to the expediency of the modern age, informs users about language at every turn of a page. Photograph: George Goulding

Dictionaries can do many things apart from looking quite cumbersome on a dusty old shelf or looking old-fashioned in a library full of digitised information.

But what is a dictionary? A book of words, thoughts or facts? That depends on the perspective of the user.

For language learners, dictionaries have largely a problem-solving value. Where else could you find out if journée means “journey” or “day” in French? Or maybe you are not sure whether the plural of “octopus” is “octupuses” or “octopi”?

Does any of this really matter? Yes. Dictionaries offer different types of information to their user: they define, sometimes describe but also provide a narrative about what the world is and what it used to be.

They are, or at least were, viewed as a robust and informative point of reference. The transition from paper dictionaries to electronic dictionaries has been seamless but not without some loss, particularly the sense of curiosity and randomness of information found by looking through a physical dictionary that just cannot be garnered while scanning a webpage.

Nowadays language learners tend to interact with electronic bilingual dictionaries on a quid pro quo basis: I type in a word, you give me the translation. Fair deal? Of course.

This leads to a language-learner-turned-sniper approach: words are picked off on a selective, need-to-know basis without any deep, overarching view of how they interact within an alphabetised, lexical or morphological framework.

Step forward paper dictionary and dust yourself off. A paper dictionary is an Aladdin’s cave of language with valuable linguistic objects such as irregular plurals, compound nouns and idioms. Most importantly, it presents linguistic order in a carefully classified way.

This is the point at which electronic lexicography loses its grip. A paper dictionary, although heavily mismatched to the expediency of the modern age, constantly informs users about language implicitly and explicitly at every turn of a page.

Although it is a very static physical object, it subtly offers an important dynamic to the user by showing defined boundaries to language through its relative completeness in a limited space.

This is particularly good for language learners, as it communicates that goal as being achievable, coherent and to some degree quantifiable. In contrast, electronic varieties of dictionaries present a vastness that encourages bite-sized linguistic snacking rather than wholesome consumption of a language in a learner’s diet.

But the argument that using a paper dictionary, or any printed material, is more beneficial than scrolling a webpage or an app is a hard sell in an academic space taken over by technology.

Knowledge is now required and requested on a need-to-know basis; perusing swathes of printed pages in size 11 font, without a minimise or maximise button, seems superfluous and increasingly out of place.

Growing evidence from the classroom points to the printed word being shelved, both literally and metaphorically, for its electronic equivalent, but this also extends to and has an impact on formal language structures.

Recent proposals regarding spelling reforms in French through the removal of circumflexes and hyphens from some words – for example, le week-end will change to le weekend – are a case in point.

Although mentioned as far back as the 1990s, the implementation of these changes precipitated by convenient spelling forms and character limits is, in part, driven by the reductive influence of technology on the written word.

It is up to paper dictionaries to redress this balance. They still remain the last line of defence in the admission of language acceptance and variation and also have a role to play in the preservation of identity.

The fact that continually weakened language structures will lead to an ongoing erosion of linguistic identity is axiomatic.

Here paper dictionaries must play their trump card by re-establishing the traditional virtue of linguistic approval being granted on the basis of frequent and accepted usage as opposed to convenience-inspired lexicalisations.

Alongside this linguistic guardianship, we should not forget the educational superiority of paper dictionaries. For example, paper dictionaries present the systematic order of the lexicon, have a preface and a user guide and supply additional information, such as irregular verb lists and stylistic guidance on language use for learners, elements that are absent in many electronic dictionaries.

But the view of technology as a potential distraction in the classroom offers a lifeline to the future of the pocket-sized paper dictionary so perennially loved and loathed by students in language classes. But it still has a role to play. The opportunity to embed dictionaries, both paper and electronic, within the language-learning space should be grasped.

They should be viewed as complementary, symbiotic objects in the educational space: one diligently providing a structured picture of language within a networked lexical, semantic and syntactic system, the other hurriedly rushing to offer multiple translations or definitions for our information gaps.

Paper dictionaries narrate the value and changes of our past and present. Electronic dictionaries, on the other hand, will define how we see the future. There is a value to both functions.

So, the next time you see a dusty old dictionary lying unused and unloved on a library shelf, thumb through its off-white, underused pages.

COMPENDIUM: THE ABCD OF DICTIONARIES