Video: Up to 500 primary schools to sign up for digital programme 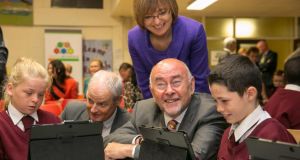 The future is digital as primary schools around the State begin to sign up for an ambitious programme that will see computers become a natural part of student life. Rolled out as a public private partnership, the “Digital Schools of Distinction” programme hopes to sign up 500 primary schools in its first year.

Minister for Education and Skills Ruairí Quinn launched the programme yesterday at Sacred Heart SNS in Killinarden, Tallaght, the first school to achieve the status of a Digital School of Distinction.

The department has partnered with Microsoft Ireland and HP Ireland, with the two companies providing €300,000 in support during the first year and giving a commitment to stick with the scheme for five years.

Aimed specifically at primary schools the goal is to help integrate information and communications technology into the normal school day. Schools that sign up will receive a classroom kit including an HP laptop and Microsoft software including windows 8, Office 365, educational apps and access to specialists in computer-based education.

The schools will go through an assessment process to help them make the most of the technology and to monitor progress, explained Mr Gerard McHugh of Dublin West Education Centre. The Centre is supporting the initiative along with other bodies such as the Irish National Teachers’ Organisation, the Irish Primary Principals Network, the Professional Development Service for Teachers, Technology in Education and the Computer Education Society of Ireland.

Mr Quinn was taken on a whirlwind tour of how the programme works, visiting clusters of students in command of laptops and tablets as they explained how the technology could be used to learn maths and improve literacy.

The initiative was important for the Government’s “educational mission” to prepare students for a digital future, said the minister, who described the occasion as a “day of celebration”.

“It is critical for students to have [computer] skills,” said Cathriona Hallahan, managing director of Microsoft Ireland.

“We are bringing in these essential resources for the Irish primary sector,” said the managing director of HP, Martin Murphy.

Schools interested in signing up for the Digital Schools of Distinction programme can do so over the web at digitalschools.ie