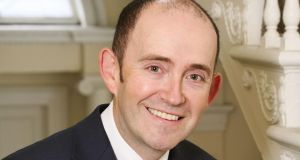 Ned Costello, chief executive of the Irish Universities Association, warns that austerity is leading to students paying more but getting less for their education.

The Irish Universities’ Association says a series of austerity measures, including a further €250 increase in the student charge this year and a one per cent cut in core pay, are simply “not sustainable”.

Ned Costello, chief executive of the organisation, which is holding an international symposium on the challenge in Dublin today, welcomed a decision by the former minister for education Ruairí Quinn to set up a committee to examine funding models.

But the expected 18-month timeframe before reporting stage “fails to recognise the urgency of the issue”, and he says “there is too much at stake to jeopardise our future through complacency or prevarication”.

The reporting timeframe of the working group will push any decision on funding beyond the lifetime of the current Government, which has come under fire for reneging on pre-election promises not to raise the student charge. 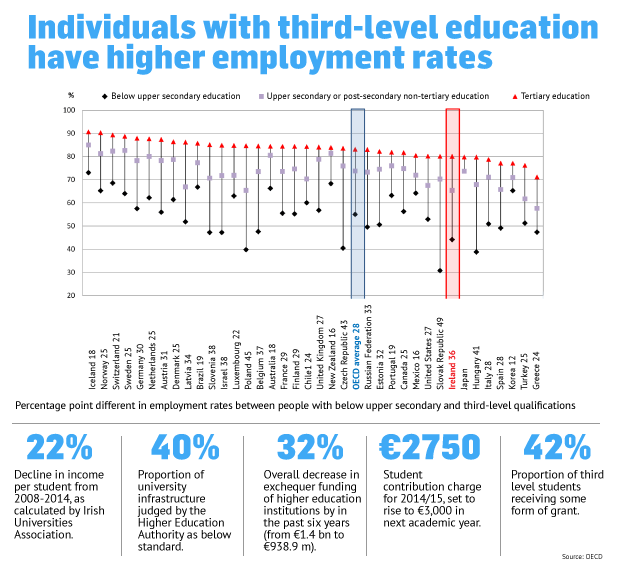 “The biggest issue facing Irish higher education is not the level of national investment but the mix of public and private funding.”

He says the key for Ireland is “to increase its level of private investment while maintaining public investment levels in higher education. This can be done in several ways that don’t require extraordinary sacrifice from parents and students”.

Demographics have added to the financial crisis, with the number of students in higher education set to rise to 146,834 in 2016 from 129,564 in 2009, according to department figures.

There has been an overall decrease in exchequer funding of all higher education institutions by 32 per cent in the past six years.

The association is also concerned about attempts to increase Government controls over university spending. A series of instances of unauthorised spending has led to plans for a Universities Bill.

However, the universities argue that it will limit their ability to recruit “star” academics, and respond quickly to market trends, with a view to building their international reputation.