Over 3,000 register for Peata charity event to help them destress ahead of final exams

Therapy dogs with the charity organisation Peata paid a visit to Trinity College Dublin yesterday, Thursday, April 24th, so students could take a break from the books to enjoy a cuddle instead. Video: Kathleen Harris 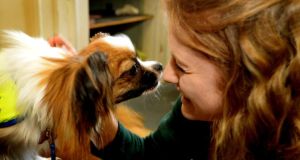 Books were temporarily exchanged for barks yesterday as Ireland’s first ever ‘exam de-stress canine therapy’ room helped Trinity College Dublin students forget their exam troubles for an afternoon with the help of some canine companions.

Over a dozen dogs of all ages, shapes and sizes visited the university to provide momentary relief to hundreds of stressed-out students ahead of finals exams next week.

Run in conjunction with Peata, a voluntary organisation providing ‘pet therapy’ sessions, the event saw owners of various breeds of dogs from all over the country converge on campus to provide the perfect study break and raise funds for the charity.

Peata hit the headlines in December for its dog Christmas carol service in Christ Church cathedral.

The event proved popular with scores of attendees thronging the entrance of Trinity Students’ Union.

“It’s such a change in atmosphere from the library all week, they’re so adorable and there’s something very therapeutic about animals, so it does really help relieve things,” said third year theology student Jeni Horgan as she took leave of her books to catch some of the action.

Having originally championed the idea, college welfare officer Stephen Garry was elated to see the prospect become a reality. “It’s great to finally see it come together,” said Mr Garry, who first raised the idea at student council meetings last October. “It’s an idea that’s been around here for a number of years but the pressure really increased this time around so we realised we had to do something about it.”

With almost 3,000 people registering an interest on the event’s Facebook page for the once-off four hour timeslot, he was overwhelmed by the volume of goodwill being generated. “It’s unexpected to say the least, I thought we might get two or three hundred attending but it’s by far the most hyped event I’ve ever seen in the students’ union,” he said.

Resident ‘therapy dogs’ have been common practice in North American universities for a number of years, with the University of Aberdeenbecoming the first academic institution this side of the Atlantic to implement such an initiative last May.

Dog-owner Joe Treacy’s three giant Leonbergers are regular visitors to nursing institutions such as St Luke’s and St Michael’s House, and 5-month-old Lani was the star of the show as a new legion of adorers lavished attention on her.

“It’s great for residents in nursing homes who’ve had pets all their lives but had to leave them behind,’ said Mr Treacy. ‘There’s known research indicating that such visits decrease stress and blood pressure, and release the happy hormones in people so it really does have a hugely positive effect.”