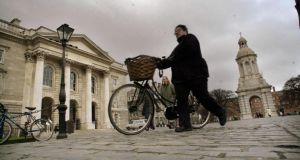 The Center for World University Rankings (CWUR) features eight US and two British universities in the top 10.

The 2014 list is based on eight factors described by the CWUR as “objective and robust”. Education quality, alumni employment, quality of faculty, publications, influence, research citations, impact and patents all influence a university’s ranking.

Alumni employment, for example, is measured by the number of alumni holding chief executive positions in the world’s top companies relative to the university’s size.

Ned Costello, Irish Universities Association chief executive, warned the CWUR rankings should be “viewed with caution”. He said the recently published Higher Education System performance report provides a more accurate picture of Irish university performance. That report includes “very positive findings in relation to the employability of graduates and the strength of research and innovation outputs”.

Mr Costello argued that some of the measures do not accurately quantify the quality of Irish education. “For example, employment performance is defined as the number of alumni holding CEO positions in the top 2000 companies listed by Forbes magazine. In an Irish context, it probably matters more to the population at large that the unemployment rate of honours degree graduates six months after graduation is seven per cent (half of the national average), and down from 10 per cent in 2008,” he said.

The complete list of CWUR’s top 1000 universities can be found at cwur.org.