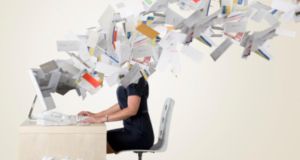 Almost three quarters of post-primary teachers surveyed by the Teachers’ Union of Ireland (TUI) believe the use of technology is increasing their workload.

The online survey of 545 teachers highlights a number of related grievances of union members: increased paperwork and bureaucracy; a series of educational and technological “fads”; and the imposition of 33 extra hours a year under the Croke Park agreement.

Some 74 per cent of respondents agreed that using technology to assist teaching had increased teacher workload in terms of preparation time and accessing suitable materials.

From a list of 22 teacher responsibilities, “using information technology to assist teaching” was ranked as the fifth most onerous duty.

Number one was “working outside of timetabled hours”, followed by “preparing for class”, “correcting student work”, and “carrying out administrative duties”.

Some 98 per cent of respondents said they often took work home with them; while 97 per cent said their workload had “increased significantly” in recent years.

TUI general secretary John MacGabhann said the frustration of teachers was a culmination of cutbacks over the last seven years.

“The pupil-teacher-ratio has been worsened, middle-management structures have been substantially dismantled and supports and programmes that benefited vulnerable students have been abolished or cut back.

“On top of this, the volume of legal and reporting demands imposed on teachers has grown exponentially.

“Indeed, capacity at teacher and school levels to deal with new additional work was among the key factors for teachers in giving an overwhelming mandate for industrial action against the roll-out of the framework for junior cycle.”

A common complaint of TUI members, who were being surveyed ahead of their annual congress next week, was the poor use of Croke Park hours. These hours can only be used for a narrow range of tasks under the deal, including supervision and subject planning, and some of those surveyed said they should be used for administrative and other duties.

Among the comments made by members, when asked to identify their main complaints, were:

- “Trying to teach while being mindful of students’ wellbeing while juggling home life and keeping up to date with technology and new methodologies.”

- “The amount of class time which is spent dealing with student behaviour severely limits the amount of teaching and learning which is happening. It is also stressful and exhausting for me as a teacher.”

Of the added administrative tasks faced by schools today, MacGabhann said: “Ultimately, students lose out when time is stolen from teaching and learning duties.”