Teachers strike reaction: ‘We’re trying to protect the integrity of the Junior Cert’ 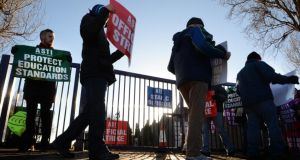 Teachers on the picket lines spoke as one yesterday in defending external assessment of the Junior Cert exam.

Protesting outside Belvedere College in Dublin’s north inner city, union members said the plan to shift the onus of assessment from the State Examinations Commission to teachers would put added pressure on already overworked staff.

“We’re trying to protect Irish education standards and the integrity of the Junior Cert examination system, which the Department of Education wants to erode away the independence of,” said science teacher Stuart Wheeler.

Apart from the ethical dilemma posed by teachers having to continuously mark their own students’ work, Mr Wheeler says he is also unhappy at the lack of direction from the department over what the new initiative might entail.

In nearby Larkin Community College, Declan Quinn said widescale industrial action was necessary to preserve the standards of education and assessment currently in place.

“This is the bridge we need to cross long term because ultimately they want to introduce other reforms, and if we give way on the Junior Certificate there’ll be more expected of us,” said Mr Quinn, an art and design teacher.

Teachers at Deerpark CBS in Cork city said the plan would harm existing relationships with students, as well as compromise fairness and transparency. Teacher Siobhán Cullagh, who previously worked in Australia, said the department was “rushing in an inadequate system. It really is going to be detrimental to the student-teacher relationship.

“There has been very little consultation with us. You can’t compare the Irish system with Australia or Finland. There is nothing in place to prepare for the backlash [of marking their own student’s scripts]. In Australia, teachers had to sign legal documents because of the backlash.”