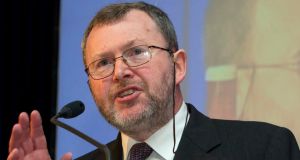 General secretary John MacGabhann said the TUI remained fearful that “lasting damage” could be caused to the education system and individual students by the changes. Photograph: Dylan Vaughan

In a revised implementation plan, circulated to unions, the department offered to slow down the pace of reforms, seeking just one subject to come under the planned “continuous assessment” regime in each of the next two years.

It also increased its provision of training for teachers, including an allowance for closing schools for one day each year for in-school workshops as the reforms are introduced.

However, the Association of Secondary Teachers Ireland (ASTI) and the Teachers’ Union of Ireland (TUI) said the department would not engage on the issues of “most concern” to second-level teachers, and they are now threatening to ballot members on non-cooperation.

Pressure on resources
Under the reforms, teachers will grade their own students over the course of the Junior Cycle in place of State exams each summer. The unions say they are concerned about the integrity of process, citing the absence of an appropriate form of national certification and the likely pressure on resources.

Speaking after yesterday’s talks, which involved other stakeholders in the sector and constituted the first meeting of a working group on the reforms, TUI general secretary John MacGabhann said it remained fearful that “lasting damage” could be caused to the education system and individual students by the changes.“Regrettably, key questions on standards, capacity and equity which we have repeatedly posed were not satisfactorily answered.”