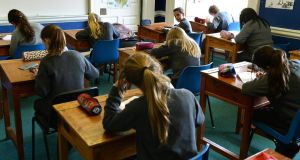 The Teaching Council says many teachers are opposed to the notion of continuing professional development being mandatory. Photo: David Sleator

Plans to compel teachers to continually add to their skills to remain part of the profession may be in jeopardy due to a teacher backlash.

The Teaching Council, the regulatory body for the profession, says many teachers are “opposed to the notion” of continuing professional development (CPD) being mandatory.

The council had proposed that teachers earn credits over their career through training, with evidence of such progress sought at regular intervals in order for them to remain on the teaching register.

However, a draft framework document prepared by the council, following initial consultations, shows strong resistance to the plans.

While teachers consulted placed a high value on CPD, a majority feared “that, if compulsory, it would promote a ‘compliance mentality’ with minimal real engagement”.

However, it suggests this would be difficult to implement in the current industrial relations environment.

“The ‘Croke Park hours’ are a significant concern for respondents and there is a broad range of opinion about their application for CPD,” it states.

The Draft Framework for Teachers’ Learning, which has been seen by The Irish Times, was prepared after six months of consultations, involving 3,349 participants. It will be circulated to stakeholders before a final plan is published in March 2016.

On introducing a credits or points system to record attendance and completion of CPD, the report says “various suggestions” have been made but “the feasibility and practicability of these must remain as an open question”.

Some participants proposed sabbatical leave and tax incentives to assist teachers to pursue research and study. “The suggestion was also made that CPD be linked to increments rather than registration.”