‘Minister for Announcements’ has no interest in negotiation, says TUI president 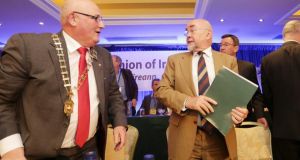 President of the Teachers Union of Ireland Gerry Craughwell (left) and Minister for Education Ruairi Quinn at the Newpark Hotel in Kilkenny. Photograph: Laura Hutton/Photocall Ireland

Teachers in the further education sector will be asked to work during the summer under reforms announced yesterday by Minister for Education Ruairi Quinn. *

The planned reconfiguration of higher and further education and training was announced to a surprised audience at the Teachers’ Union of Ireland conference in Kilkenny. TUI president Gerard Craughwell, a further-education teacher, said his colleagues were “horrified” at the lack of consultation.

“We are contracted to work 167 days, and those terms and conditions cannot unilaterally be changed,” he said.

He accused Mr Quinn of being “the Minister for Announcements”, with no interest in negotiation.

The move to year-round teaching is one of a series of reforms planned for the further-education sector.

A draft document from the new State training agency Solas, which has been seen by The Irish Times, proposes to completely alter the funding arrangements for further education, on a phased basis, with a new “outcomes-based funding model” that would assess colleges of education based on results, a move almost certain to be opposed by teachers.

Proposals
After the conference Mr Quinn said the proposals on further education were at an early stage and how they proceeded would be a matter for negotiation, but it did not necessarily mean lecturers would take on extra work.

“It simply does not make sense to leave the infrastructure of higher education lying fallow for three or four months,” he said, adding that the reconfiguration would help people back to work and tackle social snobbery about the merits of vocational compared to university education.

The announcement came amid renewed claims from teacher unions this week that they were suffering “initiative overload”. Both the TUI and the ASTI yesterday debated motions condemning plans for secondary teachers to assess their own students under Junior Cycle reforms.

Mr Craughwell signalled scope for agreement on the broad thrust of the reforms but said the Minister had “to ensure resources are in place for this exciting development in Irish education, including the ICT infrastructure and management positions”.

Hardline
A more hardline position emerged from ASTI delegates who are to hear today whether the union will accept a motion that would escalate its industrial action.

Strong criticism of cuts to guidance counselling allocations also emerged at both conferences, but Mr Quinn said yesterday these would not be reversed. The decision to abolish the posts was taken reluctantly in order to preserve the pupil-teacher ratios, he said, and it was now up to the leadership in schools to deploy their resources as they saw fit.

Among further-education teachers, a key concern is that Mr Quinn is moving towards a modular system in which students would take a number of short courses, with fears this would “dumb down” further education.

At the TUI conference, Mr Quinn also said he planned to forge ahead with the creation of “technological universities”, which would involve mergers of regional clusters of institutes of technology.