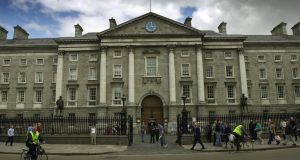 Trinity College Dublin is to discuss controversial plans for the introduction of mandatory classes on sexual consent for new students with the college’s students’ union this week.

The TCD Students’ Union unanimously passed a motion this week mandating it to organise compulsory workshops when they start university in September.

The welfare officer for TCD Students’ Union, Conor Clancy, confirmed the classes would be mandatory for almost 1,000 first-year undergraduate students.

“They are being advertised as mandatory as part of students’ orientation . . . But we won’t hold anyone in a workshop and we won’t force people into a building or anything,” he said.

First-year students living in accommodation at Trinity Hall in Dartry, Co Dublin, will be expected to attend the sexual consent workshops.

Mr Clancy said they would be confined to students at this accommodation due to logistical reasons only.

The move towards mandatory classes was based in part on the findings of a survey by the TCD’s Students’ Union on sexual experiences.

Some 25 per cent of women who responded said they had a non-consensual sexual experience, for men this was just under 5 per cent.

A spokeswoman for TCD said further discussions will be held with the union but added that university authorities are “very supportive” of the rationale behind the motion.

He said the initiative was driven by the union and aimed to initiate a wider conversation around sexual consent.

The plans have the support of senior members of the college, he added.

The move to introduce the workshops have also been backed by the JCR (Junior Common Room) committee, which represents undergraduate members of Trinity Hall. These members are mostly elected by the student body.