Shops gain from ‘Teacher Tuesday’ but will students? 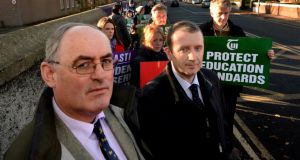 After Black Friday and Cyber Monday, retailers enjoyed another pre-Christmas bounce yesterday – thanks to Teacher Tuesday. More than 330,000 post-primary students were locked out of school, which for many meant a chance to hit the shops, joined by their parents, as well as the odd teacher coming off picket duty.

By and large, a feeling of goodwill prevailed. Parents and students quizzed on the streets of Dublin about the strike were quite evenly divided about the merits of the junior cycle reforms. Even among those who were strongly in favour of Minister for Education Jan O’Sullivan’s plan, there was a reluctance to openly condemn the teachers’ action, no doubt a reflection of the high level of respect teachers command in society.

But whether the mood will be similarly charitable after a second planned strike in January is debatable. The secondary teacher unions, the ASTI and the TUI, are riding a wave of anti-Government sentiment but there are risks attached to their strategy, and the long-term image of the teaching profession could suffer collateral damage.

Amid all the talk of school-based assessment, a bigger picture has been lost. The current plan to reform the junior cycle has been in gestation for at least 15 years. There is no electoral advantage to the Minister’s proposals. Rather they are based on the 2011 recommendations of the National Council for Curriculum and Assessment and emerge from general agreement among educational experts that the Junior Cert serves students poorly.

All the other stakeholders in education, including parents’ and students’ representatives – who have taken time to study the plan (unlike those you meet on the street) – are in favour.

Many of the concerns raised by the unions have been addressed by the Minister and while the unions want her to yield further on the issue of school-based assessment, she has described this element as “central” to the reforms.

This is not an understatement. It would be more accurate to say that without school-based assessment there are no reforms, just some tinkering at the edges of the existing Junior Cert.

School-based assessment is the norm in most European countries. Only in Ireland, where there is such obsession about the “points race” and how children perform in State examinations, does it seem like an alien concept.

The idea behind it is to take the focus off a terminal exam, encourage teachers to give continuous feedback and challenge students to take ownership of their own learning. There is an undoubted change envisaged in the role of the teacher, and this is part of a bigger battle in Irish education.

Teachers are being challenged to work in teams and to embrace continuing professional development, under a new “professionalised” model bolstered by the recently formed Teaching Council.

Prof Gerry McNamara of DCU’s school of education describes school-based assessment as “a completion of that circle” of reform. It means “more highly trained teachers given additional roles and responsibilities in the system”.

Union leaders have pointed to the example of England, where the Tory government is considering a redesign of the GCSE, the equivalent of the Junior Cert, to give greater focus on a terminal exam. However, this is being done in the context of a new scheme of performance-related pay in secondary schools, something unions here would balk at.

Whatever the pros and cons of the unions’ stance, they face a difficult task in persuading the Minister to budge – because of one very political consideration. Early next year will see the first attempts by public sector unions, including the ASTI and TUI, to lodge a pay claim. A Government already accused of doing U-turns by the dozen will be reluctant to roll over easily, or be seen to do so, in the face of strike action.