School inspectors criticise standards of teaching in maths and Irish 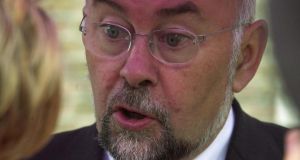 Ruairi Quinn: “Does it point to a need for reform? No, it screams for reform”

School inspectors have highlighted unsatisfactory quality standards in the teaching of maths and Irish in schools. However, teaching in all other subject areas holds up better, with more positive assessments, a report by the chief inspector of schools has found.

And while maths learning in primary schools was satisfactory or better in 86 per cent of cases, the report showed that only half of students were involved in collaborative working, something considered essential in this subject area.

Teaching quality and standards in all other subjects were found to be satisfactory or better, according to the Chief Inspector’s Report 2010-2012 released yesterday. The highly detailed report includes assessments after announced and unannounced inspections by staff from the department.

For the first time the inspector’s report includes surveys involving parents and also students, who give their assessments of teaching standards in our schools.


Minister for Education and Skills Ruairí Quinn said he had read the report with interest. It now provided a baseline of data which could be used in ongoing inspection activities.

The difficulties with maths and Irish were a problem, he said. “Does it point to a need for reform? No, it screams for reform,” Mr Quinn said of the inspector’s findings.

For too long people had “unwisely” accepted the notion that Ireland had the best education system in the world, something that blocked change. The report showed that generally the school system was performing well, he said, but it also revealed some weaknesses and pointed schools in the direction of improvement.

The school system had been working “in a challenging context” given the fiscal restraints, said chief inspector of schools Harold Hislop. Student numbers had grown while the number of teachers has remained fairly static.

Inspection procedures had been changed considerably and this was the first such report to be issued publicly by the inspector’s office, Mr Hislop said. Also for the first time questionnaires were completed by thousands of parents and students to assess their views on the provision of education.

Parental surveys
The responses from parental surveys were very positive from the point of view of education, the report indicates. The survey of 47,000 parents of primary school pupils showed that 97 per cent of them felt that teaching was good in their child’s school. At post-primary school level 87 per cent of the 20,000 parents surveyed were happy about the teaching standards at their child’s school.

The 29,000 post-primary student surveys showed 70 per cent of students said their classes were interesting and 74 per cent agreed that their teachers explained things clearly.