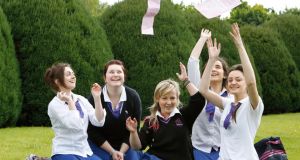 Music, technology, celebrities, and tweeting dominated this year’s Junior Cert Irish papers as examiners made a concerted effort to produce a current and culturally relevant exam.

Students opened up Higher Level paper 1 and were greeted with a large picture of 2011 X-factor winners Little Mix, who are currently taking the US charts by storm. The girl group were used to test Irish grammar.

Although there was much online chatter over the inclusion of a comprehension piece on tweeting (#gtúit) as Gaeilge, teachers felt that the some of the vocabulary used – including the word líonrú (networking) – would be unfamiliar to many teens. “I’ve been teaching Irish for over 20 years and I had to look the word up in an online dictionary,” said Robbie Cronin, ASTI subject representative for Irish and a teacher at Marian College, Ballsbridge.

Paper 1 also featured a language test built around a TG4 programme which is hosted by travel writer and broadcaster Manchán Magan.

On Higher level paper 2, the contemporary relevance continued, with students required to either write about a video they saw on YouTube, a band or musician they like or, curiously, an angry missive to the editor of the local newspaper protesting over a referee’s decision in a sports game.

The response to paper 1 was mixed. A reading comprehension question about a sad and lonely monkey in the Congo was probing but fair, according to Seamus Ó Farraigh, TUI subject representative for Irish and a teacher in Gairmscoil Cúladh, Co Donegal, although some students criticised a question which asked them to write about the sad eyes of the monkey.

Mr Ó Farraigh said that some of the essay topics – How I spent my last birthday, Fashion for people today, and Why friends are very important in people’s lives - would be challenging enough for people to write about in English, let alone through Irish.

The response to paper 2 was more favourable, said Mr Cronin. “It received very positive feedback from both students and teachers. Generally the hardest parts for the boys I teach are the unseen prose and poetry pieces, which can be incomprehensible – not so this year.”

There were no shocks or upsets in the ordinary level paper, where the celebrity theme also featured: US first lady Michelle Obama and Kilkenny hurler Henry Sheflin – widely regarded as the greatest hurler of all time – both made an appearance. Questions were asked about Ms Obama’s children, her family, and her upbringing. “The topic was current because the Obamas were in Ireland last year and Michelle Obama is due to make a return visit with her children,” said Mr Ó Farraigh.

But not all students were happy with the ordinary level paper. One boy took to Twitter to moan: “Why can’t I do honours Irish?! They got Little Mix while pass got Michelle Obama.”