Russian is top for A grades, while science subjects perform poorly 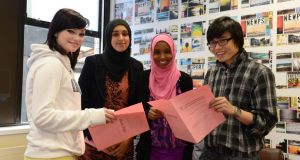 The highest rate of honours grades in the Leaving Cert are consistently achieved in minority language subjects.

The highest number of A grades is in Russian. A total of 285 students, most of whom are from ethnic Russian backgrounds, take the subject at higher level, and 79.3 per cent receive an A, while 98 per cent get an A, B or C.

Ireland’s 91 Latin students also fare well, with 39.6 per cent getting an A grade and 88 per cent securing an honour. In Italian and Japanese, 26.3 per cent and 22.6 per cent of students respectively pick up an A. Applied Maths rounds off the top five honours rate (79 per cent), with 26.5 of students getting an A.

Maths
This year, for the first time, the majority of questions on the Leaving Cert maths papers were based on the new Project Maths syllabus, which focuses on real-world applications. Introduced in an effort to combat high failure rates in the subject, it has proven divisive among teachers, parents and pupils. Did it pass its first real test?

Not quite. The number of maths honours fell significantly, from 83 per cent to 72.9 per cent. The number of A grades at higher level, however, rose from 10 to 10.9 per cent. Despite positive feedback from students about this year’s higher-level maths exam, supporters of Project Maths may also be disappointed to see the failure rate increase, slightly, from 2.3 per cent in 2012 to 3.4 per cent this year.

The real success story for maths in recent years is that numbers taking higher level have shot up since the reintroduction of bonus points, in 2011, with a corresponding decrease in students opting for ordinary and foundation level.

Last year, 11,131 took higher-level maths; that figure increased by almost 15 per cent to 13,014 this year. This has had a knock-on impact on CAO points for science, engineering, technology and maths (Stem) courses, but also means Ireland is moving closer to producing the type of highly qualified science and maths graduates the economy needs.

Irish
The number of students taking Irish at higher level has been climbing year on year. Of the biggest subjects (Irish, English, maths, French, geography, business and biology), Irish easily has the highest number of A grades, with 15.3 per cent getting top marks and 90.4 per cent securing an honour. At 0.4 per cent, Irish has one of the lowest failure rates at higher level; only music has a lower failure rate (0.3 per cent). This suggests that for those students who opt for higher-level Irish, the chances of doing well are high. The results provide further reassurance that the decision to increase the allocation of marks for the oral exam was correct.

Biology is the most popular optional Leaving Cert subject, with 31,500 students – more than 56 per cent of this year’s group – choosing to study it. But just 69.6 per cent secured an A, B or C grade, making it once again one of the most difficult subjects in which to get an honour, pipped only by agricultural science, where 69.5 per cent achieved honours. Just over 8 per cent of students of students failed higher-level biology.

Physics and chemistry as separate subjects don’t fare too well either. The fail rate for physics rose slightly, but there were slight improvements in chemistry grades and a lower failure rate.

Mind your languages
The importance of languages has grown in recent years. Large multinational firms – in particular technology giants with European, Middle Eastern, and African operations and headquarters in Ireland, such as Facebook, Twitter and Google – hire staff from across Europe due to the chronic shortage of suitably qualified European-language graduates within Ireland. Despite this, there has been no major initiative to promote languages at second or third level.

French is the most popular language, largely due to its wide availability in schools, but it has been steadily declining year on year; this year, 14,188 took the higher-level paper. The numbers taking German also fell slightly this year. Larger numbers than before are opting for Spanish, with just under 3,000 taking higher level this year.

History is not history
The sweeping changes to Junior Cycle education, which will be rolled out in phases from 2014, mean history will no longer be a mandatory subject. The History Teachers Association of Ireland has spoken out against the proposed change, suggesting that a grounding in the past is essential for students to understand the present.

Just under 12,000 students take history at Leaving Cert level. The failure rate, 4.1 per cent, is relatively low; 12.5 per cent of students achieve an A grade and 76.1 per cent get an honour.

Epic fails
Why does classical studies, a minority subject with just 604 sits, have such a consistently high failure rate? Some 10.6 per cent of students fail at higher level, and 19.4 per cent don’t meet the grade at ordinary level.