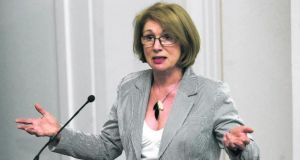 Minister for Education Jan O’Sullivan said the department would continue to roll out reform of the junior cycle curriculum regardless of the teachers’ decision. Photograph: Dara Mac Dónaill

The executive bodies of the ASTI and TUI, the two unions reprsenting post-primary teachers, are holding a crucial meeting today to decide whether to escalate their industrial action.

While the two unions are maintaining a united front in public, there are deepening tensions behind the scenes between senior officials over the negotiation strategy.

Talks chairman Dr Pauric Travers, the former president of St Patrick’s College, Drumcondra, drew up a compromise plan which would see teachers assess their own pupils to promote new types of learning, including communications skills and critical thinking.

Crucially, he said these should be done outside of state certification - thus meeting a key demand of the unions.

She stressed, regardless of the outcome, the department would continue to roll out reform of the junior cycle curriculum “which for a very long time has been in very much in need of modernising”.

She said: “[teachers] obviously have to make their decision, but ultimately I have to make a decision after that, irrespective of [teachers’ decision], we’ll have to see what they say. But, this is a policy that I believe is positive for students, and the students have to be the central people in all of this.”

There have been escalating tensions within and between the two unions over how to respond, and a joint-statement is expected this afternoon.

They have a number of options available. They can put Dr Travers’s plan to ballot either with or without a recommendation, or they can reject the plan and urge the department to return to the negotiating table.

However, department officials have said they are unwilling to concede the union’s key demand for the removal of school-based assessments from the reforms.

The unions’ executives may decide to combine rejection of the document with the announcement of further strike action, and some officials are poposing a third strike date at the end of March or lunchtime protests.

Under Dr Travers's plan, which he described as the basis for “an honourable settlement”, the new junior cycle would be split in two where one part would be marked by the State Examinations Commission through the traditional format and the other part would come from teacher assessments, carried out in the second and third year of secondary school.

The unions managed to get some minor aspects of the plan altered last week.

In particular, the department agreed to amend measures governing how students might appeal school-based assessments.

The department has said if the unions walk away from the plan it will begin rolling out the next phase of the reforms, starting with the introduction of a new science specification.

Confirming this plan, Ms O’Sullivan said “I don’t intend to delay the timetable” further. The introduction of the English specification had already begun and Science would only be postponed if the plan was agreed.

“We’ve already started English, we’ll continue with English. After that the intention is to move quiet slowly, subject by subject, so that it is a very gradual process, and we’ve been clear on that.

“We will further give clarification, irrespective of what happens today, in relation to exactly how the proposals will be implemented. I’m responsible for policy, I have to ensure that policy is in the bet interests of the students.”