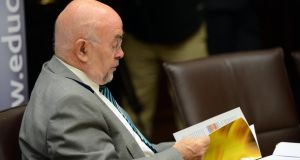 Speaking at the launch of the report yesterday, Minister for Education and Skills Ruairí Quinn said: “I think it is a wonderful tribute to the teachers” and “transformational” for pupils involved. Photograph: Eric Luke

reading and maths skills as a result of a programme that provides extra teaching resources.

Even the weakest pupils are showing significant gains, according to a study into the Deis (Delivering Equality of Opportunity in Schools) scheme.

“This is a very good news story,” Minister for Education and Skills Ruairí Quinn said at the launch of the report yesterday. “I think it is a wonderful tribute to the teachers,” he said adding that it would prove “transformational” for the students involved.

Extra supports
The Deis programme was launched in 2006-2007 to provide extra supports for pupils in second to sixth class in economically depressed neighbourhoods, said Dr Susan Weir of the Educational Research Centre. She conducted a highly detailed survey of 119 Deis primary schools and released the findings in a report, Changes in Pupil Achievement in Urban Primary Schools Between 2007 and 2013.

Children in second, third, fifth and sixth classes sat tests to gauge ability at reading and maths with 2007 as a baseline. Subsequent tests in 2010 showed that test scores increased at all grade levels as a result of the supports provided by Deis, Dr Weir said.

Gains built on
The most recent round of tests this past spring showed that not only were the initial gains maintained, they were built on, she said. The test sample size, with more than 17,000 pupils involved made the findings “robust”, she added.

Student averages in Deis schools all improved and were moving towards national averages for reading and maths skills, Dr Weir’s report showed. Low achievers in reading showed a marked improvement, with second class pupils halving the numbers ranked at the lowest level of skill.

The numbers of pupils counted as among the lowest achievers in maths also reduced at all class levels, the report showed.

Perhaps unexpectedly, the level of pupil absence for testing has fallen for all class levels between 2007 and 2013.

The report findings were welcomed by the INTO, but its general secretary Sheila Nunan warned that more needed to be done to protect the most disadvantaged children from the effects of austerity.