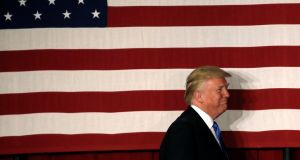 An American law lecturer says that the J1 scheme will continue even if Donald Trump is elected as President of the United States. Photograph: Mike Segar/Reuters

An American law lecturer says that the J1 scheme will continue even if Donald Trump is elected as President of the United States.

Larry Donnelly, who is a Boston lawyer and a lecturer in NUI Galway told Newstalk Breakfast “I wouldn’t put a lot of credence in what Trump says. The J1 is a fantastic vehicle for promoting international relations.”

However, he did point out that the changes introduced to the J1 scheme this year, where students must have a job secured in advance, will make it a different experience.

“Students have had to get jobs outside the Irish hotspots so they are going further afield this year.”

Mr Donnelly was commenting on the case of 100 Irish students who could have to cancel their travel plans this summer after a travel agency said they may not be able to get their visas processed in time.

The matter will be raised in the Dáil later this week by Fianna Fáil’s spokesperson on Foreign Affairs, Darragh O’Brien TD.

“This is a really sad situation and comes at a time when students are stressed about exams.

“We were assured that this would not happen when a lot of the work was outsourced to travel agencies. The Embassy is doing everything they can to help.”