Contenders emerge from 300 – with TCD, UCD and solicitors’ apprentice group in mix 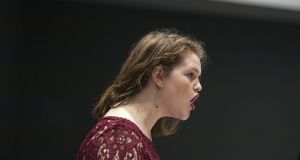 The last semi-final of The Irish Times Debate 2015/2016: Claire Ní Cheallaigh of the TCD Philosophical Society in full flight. Photograph: The Irish Times

The final of the Irish Times Debate, the annual student debating competition, takes place in Dublin this evening on the question of whether 2016 should be the last time Ireland commemorates the Easter Rising.

The individual prize for the Christina Murphy Memorial Trophy will be contested by two students from UCD and one each from University College Cork and the Cadet School at the Military College.

The event is being held in partnership with Ireland 2016, the State-sponsored programme of centenary events. It takes place at the Royal College of Surgeons, on St Stephen’s Green, and will be chaired by historian and Irish Times columnist Diarmaid Ferriter.

The winners will be invited to participate in a debating tour of the United States, hosted Prof Brent Northup Chair of Communication at Carroll College and founder of Pax Rhetorica, School for Global Dialogue.

This year’s competition rounds were designed to “give the debaters and audiences a unique opportunity to engage with the history, politics and ideologies that stem from the 1916 centenary celebrations”.

For one debater, Sarah Mortell (22) from Lucan, the theme has a particular resonance.

Her great-granduncle fought with the Irish Volunteers during the Easter Rising, while her great- grandfather was a British soldier stationed in Limerick.

There is sufficient capacity in the auditorium for members of the public to attend tonight’s debate, which begins at 7pm.Tickets are not required.