Many Irish teachers, tired of competing for insecure work at home, are leaving for jobs across the Irish Sea 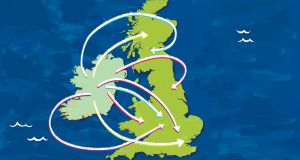 While budget 2016 announced additional teaching jobs at primary and secondary level, a huge lack of opportunity is still pushing many second-level educators in particular to find work in the UK.

Irish teachers are sought-after internationally. Recruiters are specifically targeting the Irish market, and competition to secure Irish teachers is increasing, particularly between Britain and the United Arab Emirates.

“There’s been a massive trend over the past two to three years for Irish teachers,” says Daniel Grace, director of UK-based recruiters Uniform Education. “Before we were just competing with a lot of UK agencies, but now we are even losing some candidates to the UAE, where there is no taxation.

“Schools are very receptive to Irish teachers. Every day we have phone calls from UK schools asking about Irish teachers. Initially it was just Catholic schools, but now it’s across the board.”

A 2014 report by the Department of Education estimates that 35 per cent of second-level teachers are in temporary employment. Many are on part-time hours. According to the most recent OECD report, more than half of all secondary teachers under the age of 30 are on contracts of a year or less.

“It’s not just the temporary contracts; one of the issues is that teachers can be hit with a double whammy of temporary and part time,” says Gemma Tuffy of the ASTI. “So they might be in a school on a job-share or a three-month contract, but they don’t have full hours and they are going from school to school trying to get better job security.

“They can’t get a car loan or mortgage and never really know if they are going to have a job in a few months’ time, or next September,” she says. “That has resulted in a lot of teachers moving to places like the UK because they can get that security there.”

Although there is no data for the number of Irish teachers in Britain, the number finding work there has steadily risen.

“From last September to this September, there’s an uplift of 21 per cent in teachers working for us in the UK, and I would imagine that will continue to rise,” says John Carr, a former Irish secondary school principal and now a director with Engage Education, a recruitment agency based in Dublin.

In the main, young, newly qualified teachers eager to complete their post- qualification employment (PQE) who take up the posts.

PQE involves completing 10 professional development workshops along with teaching for 100 consecutive days in a school, under the supervision of an inspector from the Teaching Council. But getting the hours to complete the PQE is hugely challenging for many graduates.

“We’ve introduced hoops for newly qualified teachers to jump through, but we can’t actually facilitate them doing it within the country,” says Carr. “If you go to the Middle East and teach English, that is not counted for your PQE, but teaching in the UK is. That’s a big reason why a lot of newly qualified Irish teachers will do that. They simply can’t get the hours here.

“It’s great to be able to sit down with people who have committed four years to training and be able to give them some good news. That is, you can teach, earn money, and start your career in a context that will really stand to you, and you can get full membership of the Irish Teaching Council.”

Unlike Ireland, there is no shortage of work for teachers in Britain. However, there is a lack of people entering the profession, and, according to figures analysed by the UK’s Association of Teachers and Lecturers this year, nearly half of new teachers leave the profession in their first year.

“There are issues in terms of the UK retaining and training teachers,” says Carr. “But schools still have high levels of teaching because it is a very measured and accountable system.

“There’s the culture of planning lessons, assessment and tracking student progression,” he adds. “Those things are very much alive and well in schools, and they can frighten Irish teachers a small bit. It takes a bit of getting used to, but when teachers do get used to it, and because it is best practice, it’s not as scary as you think.”

While the curriculum differs from Ireland’s, Carr says it’s nothing a degree specialist can’t handle.

“The infrastructure in these schools is really impressive. Our teachers are simply handed schemes of work that are usually PowerPoint presentations for key times of the year. The teacher is told, ‘This is where we’re at, this is the scheme of work, this is the resource that we usually use. Tweak at will, do what you want, let us know how it went.’ ”

Over the past month or so, recruiters have received calls from teachers who held out until September to see if they were given any work. Now many are considering their options, with a move to the UK top of the list. Jobs are often offered after a successful phone or Skype interview, and some schools will follow up by asking the candidate to visit the school and actually teach a class.

An iDay is essentially speed dating for teachers and schools. Both have already viewed each other’s profiles prior to the event and are matched up according to subject and location choice. When they get to the London fair, teachers can have up to seven interviews in one day.

“At the end of the day, schools and teachers rank each other in order of preference,” says Carr. “Teachers return to their top two schools, one on Wednesday and one on Thursday, to essentially try before they buy. By Thursday, approximately 80 per cent of teachers have two job offers.”

It’s not just the prospect of a paid position that is attractive: there is also huge scope to advance a career within the UK system. Progression in Ireland is based on seniority, but in the UK it’s based on work ethic and skills and abilities as a teacher.

Some teachers secure permanency after just a few months on the job and progress into higher-paid and greater roles of responsibility very quickly.

“Teaching is teaching, schools are schools, students are students, no matter where you go,” says Carr. “If you want to get your PQE done and earn some money, start your career and progress, or just earn enough to do what you want to do in life, the UK is a strong start or addition to your career as a teacher.”

After graduating from UCC in 2012, Hayes was offered some hours in a school, but opted to go to the UK, where she landed a full-time job on arrival.

“It’s a very steep learning curve, but it’s very rewarding because there are so many more opportunities for promotion and development,” she says. “Schools have budgets for you to go on courses and they want you to be the best you can be. There is a lot of pressure on us to deliver, and there are long hours. There’s so much more responsibility, with reporting, marking and tracking everything.

“When Irish teachers come over as nearly qualified, some comment about the workload and the level of attention to detail. But the attention given to you when you first come over, if you’re just out of university, is brilliant. You are given mentoring, extra support and classes off each week.

“I’m very happy with my current school. We’ve very few issues, a strong department, and we are well looked after in terms of resources. I might go home eventually, but I’m quite happy here and the opportunities for progression are much better here.”

Long graduated from the University of Limerick in August 2012 and applied for some teaching jobs in Ireland, with no luck. She was offered work in London through a recruitment agency, but found herself in a difficult school situation.

“It was a school that shouldn’t have been taking new teachers at all,” she says. “When I arrived, it was on the brink of failing Ofsted [Office for Standards in Education, Children’s Services and Skills]. They needed more experienced teachers, and the agency should never have put newly qualified teachers in there. I resigned, and I really didn’t know if I even wanted to stay teaching.”

However, Long had also signed up with Engage Education, which put her to work as a supply teacher. This allowed her to experience a different schools, build her confidence back up and get to grips with the second-level system. Now she has a permanent job.

“You can hear a lot of horror stories about working here,” she says, “but since that first time I haven’t had a bad experience. We have a higher workload than at home, but I don’t have a problem doing that. I really like it here.”