Institutes of Technology may face unrest over pay, union warns 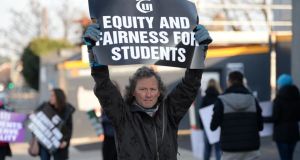 Institutes of Technology may face disruption over the coming months after a teachers’ union announced plans to ballot members over a campaign of industrial action.

The Teachers’ Union of Ireland said it was taking the move in the face of cuts to education services and “draconian” legislation which it says will cement pay reductions imposed during the economic downturn.

The union’s president Gerry Quinn announced plans on Wednesday to ballot members at the State’s Institutes of Technology over a campaign of industrial action, up to and including strike action.

While there are also plans to ballot second-level teachers, union sources say the timing has not yet been decided.

“We want a fair and sustainable resolution of these issues. The way to do this is by talking, not threatening punitive legislation,” Mr Quinn said.

The Government is due to enact shortly the Financial Emergency Measures in the Public Interest Bill, which it says will lead to the gradual restoration of pay for public sector employees.

The union says its members voted overwhelmingly to reject the Lansdowne Road agreement on public service pay restoration on the basis that it “failed to address critical issues that are swamping the education system”.

The union’s general secretary John MacGabhann said he anticipated a “resounding” vote in favour of industrial action among lecturers.

If the Government enacts its legislation on public sector pay, he said a campaign of industrial unrest is likely in the new year, in advance of the general election.

Assuming there is a vote in favour of industrial action, the precise steps to be taken will be decided by senior union officials. Any action will be timed to avoid disrupting students’ exams, he added.

As well as pay cuts, the union says there are major issues of concern such as “critically low staffing”, precarious employment contracts and larger class sizes.

In the meantime, the union is planning a lobbying campaign of candidates across the political spectrum ahead of the election.

“We will be reminding representatives that education is the engine of our economy and an inspiration for our creativity, culture and citizenship. Equality in society,” he said.

The union has maintained that is had been a party to the earlier Haddington Road agreement on pay and productivity, which is due to expire next summer.

However, the Government and many unions consider the Lansdowne Road accord to be, in effect, a two-year extension of this earlier deal, running up to September 2018.

TUI president Gerry Quinn has said it is too early to say whether TUI members would continue to implement work practice reforms and productivity measures - such as an additional 33 hours per year, introduced as part of the earlier agreements with the Government - after the Haddington Road deal expired.

The union’s position remains that it is not bound by the decision of the broader public service trade union movement to ratify the Lansdowne Road agreement.

Teachers will receive the same levels of pay restoration as other groups in the public service under the Lansdowne Road agreement - about €2,000 in three phases by the end of 2017 - despite the decisions of the TUI and ASTI members to reject the deal.

The TUI, however, says many low-paid members on low hours will not stand to benefit from any pay restoration.