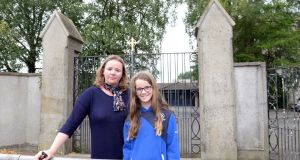 Elizabeth Bartholomew never envisaged uprooting her family simply to get a school place for her daughter.

The mother of five is happily settled in Newbridge, Co Kildare, with a choice of about five secondary schools within a 10-minute drive.

However, her eldest child Katherine is due to start secondary school in 2018 and has no guarantee of a school place.

Almost all of the secondary schools nearby are either oversubscribed or unavailable on the basis of their admissions criteria.

A 30-minute rush-hour commute to Naas is the next option. However, many of the town’s secondary schools have waiting lists and it is doubtful she will get a place, Ms Bartholomew says.

The prospect of commuting even farther afield is too much to bear, particularly when there are four children in the family who will face a similar battle for school places.

“The last thing we want to do is to take the kids out of school and move house but it’s something that, increasingly, we’re thinking about,” she says.

“It seems bizarre that there is no guarantee of a school place locally given the size of the population.”

Katherine currently attends Newbridge Educate Together primary school. Her preference is to attend the Cross & Passion College in nearby Kilcullen, where many of her school-friends are due to go.

“They offer a good range of subjects which meet her needs. On a pastoral level, they are best suited and they have a track record of accommodating children who are not from a Catholic background,” Ms Bartholomew says.

However, she says her daughter is likely to languish towards the bottom of the waiting list due its admissions policy.

“We don’t live in Kilcullen, we’re not Catholic and she’s the first of the family. All I know is that we will be well down the list.

“It’s very disappointing and very stressful. It’s also tough on my daughter who keeps asking where she’ll be going to school.

“When I was younger, there was no problem getting a school place. We just never thought about it. Now, it’s a big worry for all the family.”