Hundreds attend UCD service for those killed in Berkeley

Mourners told: ‘They lived and laughed and loved and left . . . we will not forget them’ 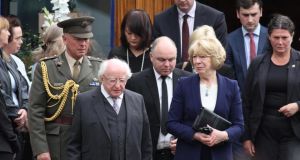 President Michael D Higgins, his wife Sabina and other mourners at the UCD memorial Mass for those who died at Berkeley. Photograph: Nick Bradshaw 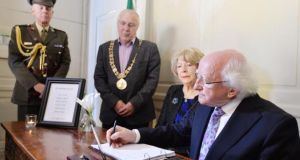 President Michael D Higgins signs a Book of Condolence at the Mansion House in Dublin on Thursday for the victims of the Berkeley balcony tragedy. Photograph: Alan Betson/The Irish Times 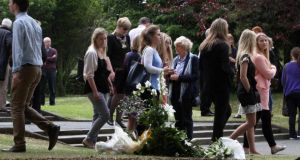 Mourners outside the church at UCD where a special memorial Mass was held for the Irish students who died in the Berkeley balcony fall. Photograph: Nick Bradshaw

Hundreds of people have attended a special Memorial service in UCD for the six Irish students who died in Berkeley.

UCD students, friends of those who died in Berkeley, family members, staff and members of the public, came together as a single body of mourners in the college’s circular chapel to mourn and remember and seek the solace than comes only from sharing, remembering and praying.

Even before the formal proceedings – an ad hoc act of remembrance infused with religious rites but not a formal service as such – the tone was set when cellist Eithne Nic an Ríogh, a friend of two who those who died; Eimear Walsh and Lorcán Miller, played a beautiful slow air lament, Amhrán Mhuinse.

The sombre, flowing composition and the the cello’s deep subtle notes lent an appropriate funereal air to the gathering.

The chapel sat around 500. By the time President Michael D Higgins and his wife, Sabina, arrived, the numbers had been swelled by those standing along the walls and those outside.

The president and Mrs Higgins took their seats near the father and brother of Niccolai Schuster and grandparents of Lorcán Miller, two who more of those who died.

Niccolai was a second year history and politics student, Lorcán was a third year medical student.

Eimear was also a third-year medical student. They died with Olivia Burke, who studied at IADT in Dun Laoghaire, Eoghan Culligan who was in DIT, and Ashley Donohue, their Irish-American friend from San Francisco.

To the families of the bereaved and those who were still “courageously fighting” for their lives and to recover, he said “just know that you are close in our every thought and prayer”.

He ended his short address with what he described as an ancient quote: “say it not in grief that he lives no more but in thankfulness that he was”.

Fr Leon reflected people’s motivations and feelings back to them: they were here, grieving together, because of their common bond of humanity – “in friendship, solidarity and prayer”.

There were two readings. Conor Rock read from the Book of Isaiah while Eimear Redmond read from St Paul’s Letter to the Romans, his “who will separate us from the love of Christ?” letter.

In between the two readings, soprano Emily Doyle sang Sé an Tiarna M’aoire her voice cutting through the stillness, cushioned by the cello and a low choral murmur.

Fr Leon struggled at times, as so many priests have before him and so many more will yet, to put words on such an event.

But, he noted, “the sense of community, of communion indeed, is profound” in the manner in which people had come together – across Ireland, across America and across the ocean that separated them.

“All this tells us,” he said, “is that it really is love that makes the world go around.” Love conquered all, he added, and nothing in life, in death, could take away the love of God. He quoted a philosopher who sought to articulate American feelings after 9/11 – “we are called to hope.”

Eithne Nic an Ríogh gave us Camille Saint-Saëns ’ The Sawn, its sweet, almost filigree, delicacy filling the air with a sense of grace. And then came the Prayers of the Faithful.

Students Cian Byrne, Guy Prendergast, Clare O’Connor, Aoife Keane, Alex Trimble, Catriona Loomers and Dean of Medicine Pat Murray voicing concern and thoughts for the dead and their families, for the injured and theirs, the students and community in Berkeley, for the staff of UCD who had “the privilege and joy of teaching”, for all students travelling now anywhere, all deceased UCD students who preceded the six in Berkeley, and for a Belgian Erasmus student who died recently.

All were remembered. All were thought about.

Students were “the beating heart” of any university, said Barbara Redmond, Dean of Undergraduate Studies. All present were experiencing but “a drop in the ocean of unimaginable grief” felt by the families of the dead and injured, she said.

Life was fragile, she reminded us all. Seize life, she urged, “and care for each other”.

UCD president Andrew Deeks spoke of expectation cut short but of the mobilisation of spirit and support in the aftermath of the tragedy. He ended his address quoting Joyce, whose Bloom’s Day would now have another memory for many in UCD.

But his words came not from Ulysses, but rather from Finnegan’s Wake. “They lived and laughed and loved and left,” he said, adding: “we will not forget them”.

The silence was broken by slow, subdued sobbing.

It was warm and lilting, embracing and comforting. And when it ended, there was silence.

Then the tears flowed, smothered occasionally by embracing, hugging and the silent hope for something better.