How did Jan O’Sullivan do at the teachers conferences? 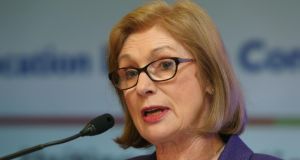 Ministers are used to being booed and heckled at teacher conferences but not Minister for Education Jan O’Sullivan. A warm reception from the INTO in her home county of Clare was followed by high praise from the TUI in Wexford, where general secretary John MacGabhann told delegates how she had won their respect by meeting them “on more occasions than a succession of previous ministers put together”.

Ministerial handlers, usually eyeing the exits for a quick getaway were instead relaxed in their seats, counting rounds of applause (27 was the official tally in Ennis). They nearly fainted when TUI delegates – currently involved in industrial action against the Minister over the junior cycle reforms – gave her a standing ovation for expressing support for workers in St Angela’s College, Sligo.

Political hacks asked was this a sign of Labour reconnecting with its trade union roots. Or did it signal perhaps a new spring tide for Labour that would reverse the party’s austerity-era electoral fortunes?

Asked about the applause, the Minister gave a more guarded reply: “I would not go overboard on it.”

O’Sullivan was in the happy position of entering conference season at a time of increased investment in education, albeit modest, after close to eight years of cuts. Children with Down syndrome, small schools and part-time teachers have all benefited from extra resources and policy initiatives announced in recent weeks.

But above all perhaps the Minister had one big advantage facing the teachers this week: she was not Ruairí Quinn. The former minister for education was gone but not forgotten by teachers who used the occasion to try to rewrite a bit of history surrounding the junior cycle strike.

In a joint statement, the presidents of the TUI and the ASTI described the “origins of this serious dispute” as Quinn’s decision to replace the Junior Cert with a new award based on school assessment.

However, by that stage, in late 2012, the unions had already pulled out of consultations on junior cycle reform in which all other education partners were involved.

The unions have vowed next week to picket teacher training colleges to stop their own members from attending professional development courses to prepare for the new curriculum.

The unions believe they can rely on public support to maintain the status quo and have pledged to sustain the industrial action into next year. But as the pay talks approach, this view may change, and ASTI general secretary Pat King admitted it would be far better to achieve “a successful conclusion” before the summer to avoid the two issues becoming intertwined.

O’Sullivan’s political mentor was Jim Kemmy, and when he was once asked about her strengths, the Limerick socialist highlighted her “great skill at defusing rows”.

That skill has been put to the test in this dispute. To date, she has earned a badge of merit, but can she come out of this stand-off with distinction?